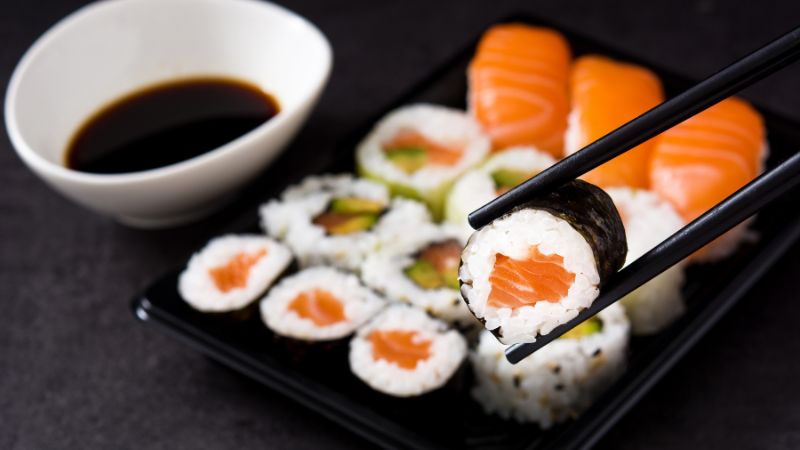 Whether you have a large family or simply love buying products in bulk, Costco is the perfect store. At Costco, customers regularly find savings on household products and food sold in bulk.

But if you’re unfamiliar with Costco and don’t know what the store sells, you might be wondering about the sushi. For example, is Costco sushi of good quality? Here are 15 things you should know before purchasing the product!

15 Things to Know Before Buying Costco Sushi In 2022

1. It’s Best to Eat Costco Sushi as Soon as Possible

At Costco, the sushi comes pre-packaged with a date indicating when it was made and when you should eat the sushi.

Still, customers note that sushi from Costco tastes best when you eat it the same day you buy it.

Put differently; it’s not the best idea to leave Costco sushi sitting in the fridge for days because the flavor won’t be as good.

Unlike a sushi restaurant, the sushi at Costco may not have been made the same day you purchase it, so it’s not as fresh.

2. Not Every Costco Store Sells Sushi

Unfortunately, not every Costco location sells sushi. Therefore, it’s best to call your regular store and find out whether or not it sells sushi, what kinds, etc.

Additionally, the Costco website can tell you whether sushi is available.

To find out if your Costco store sells sushi, simply enter your zip code in the Costco store locator and search “sushi” in the search bar.

Then, the website automatically directs you to the available or similar products your Costco store sells.

The sushi available at Costco is supplied by Snowfox Sushi (JFE Foods), located in Southern California.

Along with Costco, Snowfox Sushi provides products to several other grocery stores, like Sam’s Club, Kroger, and Albertsons.

Therefore, it’s important to note that Costco’s seafood department is not responsible for preparing the sushi. Instead, the company receives pre-packaged sushi from Snowfox Sushi.

Like everything else Costco sells, the sushi is available to purchase in bulk. So, if you have a large event coming up and want a sushi platter, Costco is the perfect place to shop.

That said, Costco sushi platters range in size and are available in 24, 32, 34, or 50 pieces. Additionally, most of the sushi platters come with a variety of types of sushi.

Moreover, keep in mind that the sushi platter selection varies based on the specific Costco location.

5. Costco Changes the Type of Sushi it Sells

At some Costco stores, the type of sushi for sale changes weekly or monthly. That way, customers can try new flavors, and the store can see what kinds are most popular.

So, if you want to know what type of sushi is available at your local Costco, it’s best to call the store and find out. Or, as previously mentioned, you can always check online.

According to customer reviews, most people who buy sushi at Costco say it’s worth it.

Still, some customers have complaints about the sushi, saying the rice was too dry or there was too much wasabi on the rolls. Despite that, most of the reviews say the price is worth it.

However, keep in mind that Costco sushi will never be as fresh as sushi from a sushi restaurant.

With that, Costco’s sushi is pre-made ahead of time, while sushi restaurants make the sushi at the time you order it.

Even if you are a vegetarian, Costco has sushi options available for your specific diet!

Although sushi platters have been available at the bulk retailer for some time, Costco recently implemented a vegetarian alternative to cater to more customers.

With that, the vegetarian sushi trays usually have a sticker or other indicator that they are vegetarian-friendly.

One of Costco’s biggest and most prominent competitors is Sam’s Club, which also offers its members a wide selection of prepared sushi rolls.

However, not every Sam’s Club store sells sushi, so it’s essential to keep that in mind.

One of the most convenient things about buying sushi from Costco is that the dish comes pre-packaged.

So, if you’re in a hurry and need to grab dinner for the family, Costco’s sushi platters are an efficient move.

Further, all you have to do is pick up a package of sushi and enjoy it; there’s no other preparation needed.

According to sushi enthusiasts, Costco’s sushi quality isn’t of the highest quality. But, considering the price, it would be wrong to assume that.

Further, customers note that the sushi is not horrible, but it’s also not the best sushi you’ll ever taste in your life.

Again, sushi from Costco is reasonably priced and definitely won’t cost as much as going to a sushi restaurant.

Additionally, the ingredients aren’t all-natural or organic and include elements like “natural and artificial crab flavor.”

In addition to sushi, Costco also sells an array of other seafood options, including:

12. You Can Order Sushi Online

At some Costco stores, you can order sushi online and pick it up at your local store whenever is most convenient for you.

However, keep in mind that not every Costco location offers this service.

Still, you can utilize Instacart (a grocery delivery service) to order sushi and either have it delivered or ready for in-store pick-up.

13. Sushi Is Located Near the Seafood or Deli Departments

Typically, you can expect to find sushi at Costco in the deli or seafood section of the store. But, if you’re unable to find the product, don’t hesitate to ask a Costco associate.

Understandably, you may have walked by the sushi in the deli section because Costco’s is very extensive.

14. You Have to Be a Costco Member to Buy the Sushi

One critical detail to keep in mind before buying sushi from Costco is that you must have a membership to do so.

That said, there are three membership options at Costco, which cost either $60 or $120 per year.

Additionally, you can have a friend or family member with a Costco membership buy the sushi for you if you don’t want to invest in a membership.

Fortunately, Costco’s sushi selection includes some of the more popular kinds available. For example, Costco members note that the California sushi roll is a fan favorite.

Still, Costco sells other varieties, too, including vegetarian options.

Moreover, if you want to try a few different sushi options, it’s best to purchase one of Costco’s platters, which typically includes three to four kinds of sushi.

But, keep in mind that the sushi selection varies based on your location, so Costco may not always have your favorites in stock when you want them.

Costco’s sushi is worth the price, especially if you’re in a hurry and need to pick up something for dinner.

Also, Costco sushi is reasonably priced for the quality of the ingredients. Finally, Costco sells sushi in large platters containing as many as 50 pieces, so you can easily feed an entire party.