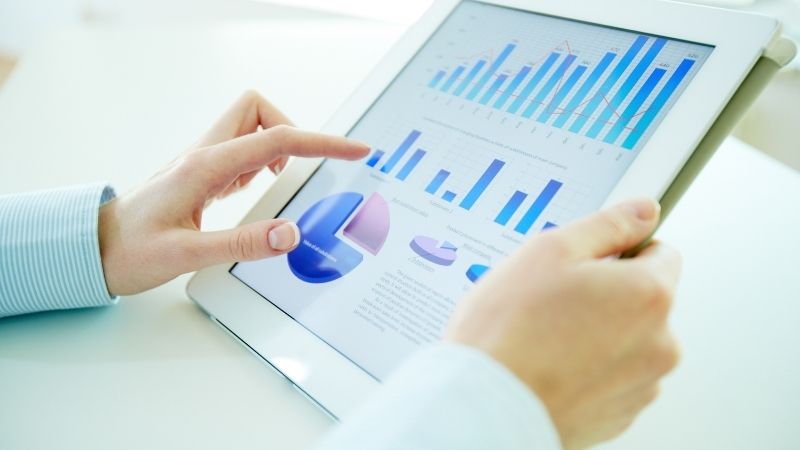 Have you been wondering about some of the most interesting facts and trends related to grocery shopping statistics? If so, keep reading because I’ll share 23 of them below!

An interesting fact about grocery shopping is that Americans have spent on average 41 minutes inside the grocery store.

However, this number does vary slightly depending on whether it’s a man shopping or a woman but both age groups spend between 40 and 50 minutes on average grocery shopping.

While the number can vary depending on the number of people in your household, the average cost of grocery shopping comes out to $120 per week.

For example, a family of four might spend about $200 per week on grocery shopping whereas a single person may spend a little less than the $120 average.

3. Walmart Has the Bigger Supermarket Sales

In what might not be a surprise to some people, Walmart is the biggest supermarket with over 16.3% of the market share in the grocery sector.

4. Saturday Is Most Popular Shopping Day

5. 4 PM to 5 PM Is Busiest Weekday Time For Grocery Shopping

We’ve all gone to the grocery store on our way home from work, so that likely accounts for the fact that between 4 PM and 5 PM during the week is the busiest time for grocery shopping.

Furthermore, most of the grocery shopping done during this time is people picking up last-minute add-ons and items to make for dinner, or grabbing a quick rotisserie chicken from the deli.

For people who shop online, you might think you’re saving money, but in reality, people spend on average $40 more when they are grocery shopping online.

However, this is not accounting for any tips or delivery fees associated with most online grocery shopping, so the total is higher than $40.

7. Millennials Online Grocery Shop The Most

We all know millennials are the most comfortable with technology, so it shouldn’t be a surprising fact that millennials make up 47% of online grocery shoppers.

Also, this age group is more comfortable with using debit or credit cards online and has a fondness for delivery services, such as Instacart which powers a lot of grocery store deliveries.

8. Women Are The Shoppers

Another fact that doesn’t surprise us is the fact that women are the dominant grocery shoppers in their households.

Furthermore, women are traditionally the ones preparing meals and organizing the grocery list, so it would make sense they would do most of the grocery shopping.

Online grocery shopping has become more popular over the last couple of years, so it shouldn’t be a surprise that 22% of shoppers grocery shop online once a week.

Additionally, online grocery shopping is convenient if the weather is bad or if you just need a few additional items to make your planned evening meal!

An interesting fact that we thought we’d pass along to you, the average age of a grocery shopper is 44 years old!

If you’re a couple and live in the Midwest, it’s estimated that you spend about $5,587 on groceries each year, which is about $1,000 less than couples in California.

Also, since the cost of living is higher in states like California, it’s easy to see why those in the Midwest spend less money on food. 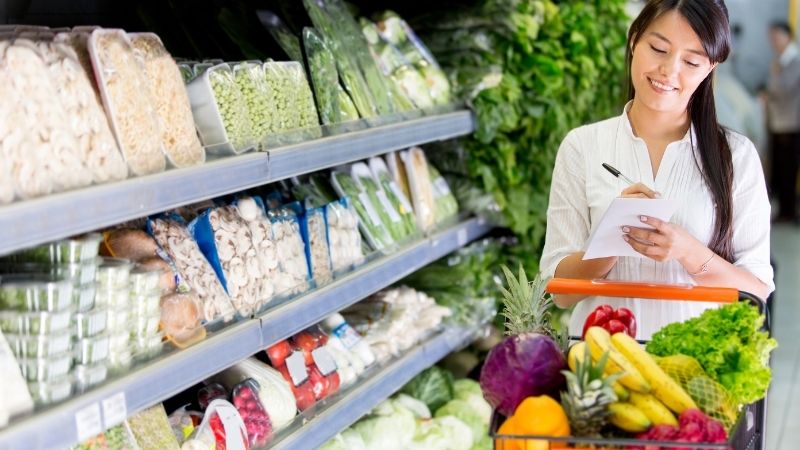 Furthermore, different stores offer various products, so people might shop at one store for meat and another store for fresh fruits and vegetables.

In what probably isn’t a surprise to most people, sweets and processed foods account for about 25% of grocery shopping money.

However, it’s important to note that 25% also support food that’s locally grown, so not everyone is buying junk food and processed foods when shopping.

Grocery stores on average were 42 square feet in size when it was looked at in 2019, which is a fairly decent size considering the variety of grocery stores throughout the country.

A lot more people began shopping online for groceries in 2020, but the fact that online grocery shopping reached $89.2 billion in 2020 is still an impressive feat!

Furthermore, online grocery shopping is expected to continue to grow throughout the next several years and is expected to surpass $100 billion quickly.

It’s not your imagination if you think grocery stores are stocking more items than ever before since in 2020 the average grocery store carried more than 40,000 items!

Also, it’s estimated that about 40% of the food supply total is thrown out, which is sad considering how many people all over the world starve and lack proper food sources.

A loaf of bread in 1913 was only $.05 which is a significant difference compared to current times where bread prices average about $2.50.

However, we also have a lot more bread options compared to 1913, including more brands, types, and specialty bread offerings.

A dozen eggs in 1913 was $.37 and when you compare that to today with the average price of a dozen eggs being around $2.80 for a dozen, it’s crazy to think about!

Furthermore, the prices of eggs are continuing to go up and when diseases infect chickens, it makes the prices higher for a while.

The United States has a lot of supermarkets with there being around 38,000 around the country, and about 70% of those are conventional types of grocery stores.

Further, the other 30% of supermarkets are warehouses, military commissaries, gourmet stores, and supercenters, such as Walmart Supercenter.

Personal grocery shoppers are becoming a bigger side gig now than ever before, and on average will make $27 per hour!

For example, if a personal grocery shopper works a regular 8-hour shift, they can easily make over $200 a day just grocery shopping!

Another not-so-surprising fact about grocery shopping is that about 70% of female grocery shoppers carry a list when they head out to the store compared to 52% of men.

However, the reasoning for this is unclear as it’s likely it’s because women do most of the grocery shopping so they have more items to purchase compared to men.

A little insight into men is that when they grocery shop, they predominantly spend money on alcohol and meat, which makes sense given men often grill and are the meat preparers.

How Many People Shop At A Grocery Store Everyday?

It’s estimated that around 32 million Americans grocery shop every day, which is about 1 in 7 adults grocery shopping each day.

How Often Do Canadians Buy Groceries?

Canadians go to the grocery store about 5.43 times per month, which equals out to 1.29 times each week, and that’s likely to buy produce, fresh products, and other perishable items.

What Age Group Buys The Most Groceries?

The 18 to 29 age group buys the most groceries with 10% of this group going out grocery shopping more than four times a week!

In contrast, only 3% of people over the age of 60 went to the grocery store four times a week, which makes sense given older people don’t eat nearly as much as younger age groups.

Where Do Millennials Shop For Groceries?

Millennials spend a lot of time online, which is no real surprise, and 33% shop at online retailers for their groceries, which includes any retailers where online grocery delivery is possible.

Furthermore, this group is more comfortable and confident to have their items delivered to them instead of going out to the store.

How Much Do Gen Z Spend On Food?

It’s estimated that the Gen Z households spend about $550 per month on groceries, but spend $760 total each month on food, so they also order more takeout and delivery restaurant items.

Is The Grocery Store Industry Growing?

The grocery store industry is growing in the United States at an average rate of 2.7% annually and has been ever since 2017.

Also, Saturday is the most popular grocery shopping day, but between 4 PM and 5 PM during the week is the busiest time because of people picking up items on their way home from work.

The average time spent inside of a grocery store is 44 minutes, which only varies slightly between men and women!