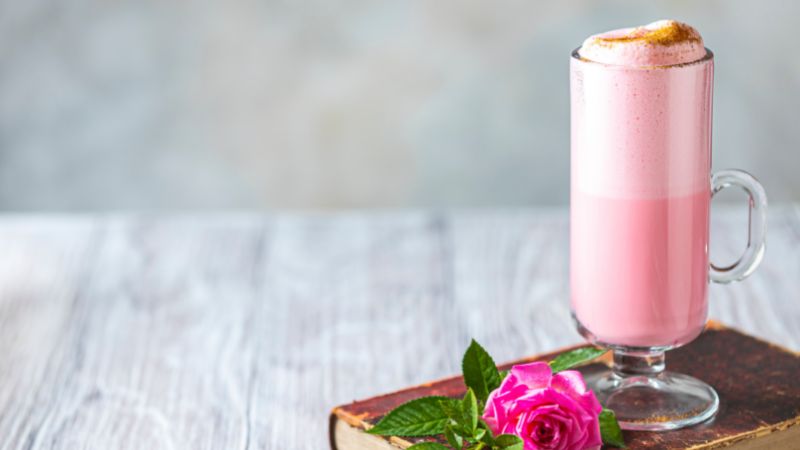 Over the years, Dunkin has established itself as the world’s leading quick-service restaurant franchise specializing in freshly brewed coffee and baked donuts.

What Is Dunkin Pink Velvet Macchiato?

As its name suggests, the Pink Velvet Macchiato has a colorful pink layer that gives it a photo-perfect look when served iced.

The limited drink gets its pink hue from the Red Velvet Swirl it’s made with, which, in turn, is a blend of red velvet cake flavor, cream cheese frosting flavor, and red coloring.

This espresso-based beverage made its debut in Dunkin stores worldwide in 2020 and within no time became a fan favorite.

The Pink Velvet Macchiato is offered at Dunkin Donuts stores for a limited time during Valentine’s day due to its beautiful pink layers getting everybody swooning.

Dunkin’s culinary team deconstructed the red velvet cupcake flavor to identify its nuances, such as cocoa sweetness and cream cheese tanginess during its creation.

Dunkin Pink Velvet Macchiato is served hot or iced at the American Coffee and Donuts Company for the best culinary experience.

Additionally, the macchiato is best served with its pink counterpart: the Dunkin Cupid’s Choice Donuts.

What Is Dunkin Pink Velvet Latte?

This creamy espresso is a limited coffee beverage at Dunkin’ and is mainly offered during Valentine’s day due to its beautiful love-themed pink layers.

The drink has a red velvet cupcake flavor, which resembles a red chocolate cake served with cream cheese frosting. The drink is served hot or iced.

In addition, the Dunkin Pink Velvet Latte has a sweet taste that contrasts immaculately with the bitterness of Arabica coffee to give a smooth and cohesive taste.

Nevertheless, before taking a sip on this pretty layered drink, it would be advisable to stir it before taking your first sip to mix everything up. Otherwise, the first sip could be all syrupy.

Luckily, you can make this espresso at home by mixing cream cheese, cocoa powder, milk, and coffee for the chocolatey and creamy red velvet cupcake flavor.

Afterward, top it with dark chocolate sauce, whipped cream, and cocoa powder to give it a hint of cream cheese icing.

For instance, Dunkin Pink Velvet Latte is made by mixing two-thirds of steamed milk, one espresso shot, and then topped with thin-layered milk foam.

Dunkin makes its iced latte by mixing espresso with cold milk and then pouring the mixture over ice for a perfect balance of cool and creamy.

Iced macchiato is made by pouring cold thin layered milk over ice, then topped with two espresso shots.

Nonetheless, it’s important to note that the prices of these espresso beverages may vary from one Dunkin store to the other.

So, it would help if you confirmed the prices of the two espressos with your local Dunkin’ store.

To learn more, you can also read our posts on whether or not Dunkin’ have almond milk, matcha latte Dunkin’, and Dunkin’ Americano.