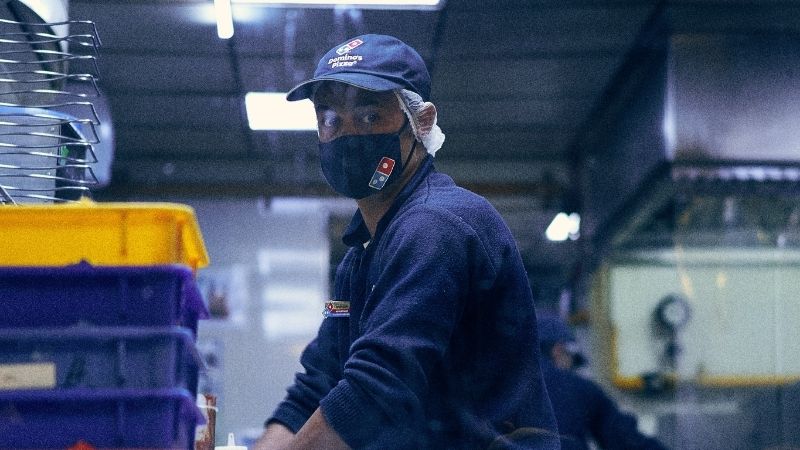 Domino’s is one of the top pizza restaurants in the world. With so much success over the years and no signs of decreased company growth, many are interested in getting their own piece of that pie.

Can you apply to open and run your own Domino’s restaurant? This article will give you the basics and answer commonly asked questions about being a Domino’s franchisee!

Domino’s is a franchise with thousands of individually owned locations worldwide in 90 international markets in 2023. The company prides itself on maintaining an internal workforce and franchise strategy that keeps the pizza restaurants running smoothly and successfully. There are several requirements for Domino’s employees who want to own a store, including management experience.

Keep reading for more information on owning a Domino’s franchise!

How Much Does It Cost To Own A Domino’s Franchise?

In addition, new franchise owners are required to have a minimum net worth of $250,000.

How Many Domino’s Locations Are There?

Domino’s International has a global reach of over 18,300 stores within 90 international markets. In the US, there are currently 6,571 Domino’s stores.

How Much Does A Domino’s Franchisee Earn?

Also, franchise owners get benefits, including a 401k, insurance, and 50% off the price of pizzas for family and friends.

However, keep in mind that Domino’s receives a 5.5% royalty fee from a store’s weekly gross sales.

Are Pizza Chains A Profitable Business?

Pizza restaurants are part of a reliable and growing industry, worth an estimated $46 billion in revenue, and national pizza chains claim 60% of the market.

Also, Domino’s pizza is by far the leading pizza chain in the US, earning 42% of national industry sales in 2021.

Owning a pizza restaurant is one of the more profitable investments today compared to other restaurant franchise businesses.

Who Owns The Most Domino’s Franchises?

In the US, the franchisee who owns most Domino’s stores is a man named Mike Orcutt. He is the CEO of Cowabunga, Inc. and owns a total of 101 Domino’s locations.

Further, Orcutt has been part of Domino’s for 40 years and began franchising in 1990.

How Do You Sign Up To Own A Domino’s?

To sign up to own a Domino’s in the US, you first need to be an employee at a Domino’s store. Also, you can visit Domino’s online franchise management school, called PieNet.

Further, you will need an employee account to log in to PieNet and start the process of learning and applying to own a Domino’s franchise.

Additionally, you can email franchising@dominos.com to inquire about signing up as a franchisee.

What Are The Requirements To Own A Domino’s Franchise?

There are several requirements for potential Domino’s store owners.

In most cases, Domino’s only considers internal employees as candidates for opening their own Domino’s franchise, leading to more experience in the staff of a new location.

To qualify, you must have at least 12 months of experience as a Domino’s manager or supervisor.

As a new franchise owner, you will go through four months of Pizza Prep School and a Franchise Development Program that lasts five days.

How Can You Become A Domino’s Franchisee Outside The US?

Master Franchisees typically invest millions of dollars and have many responsibilities agreed upon with Domino’s International.

If a Master Franchisee decides to offer sub-franchising, you can apply for the position by emailing franchising@dominos.com, where your application will be reviewed.

Further, the local representative usually sets up their own internal qualification process for those who want to own and operate a Domino’s store.

To learn more, you can also read our posts on how late does Domino’s deliver, is Domino’s halal, and can you freeze Domino’s pizza.

Domino’s is currently only considering internal employees like Domino’s managers and supervisors for the franchise program.