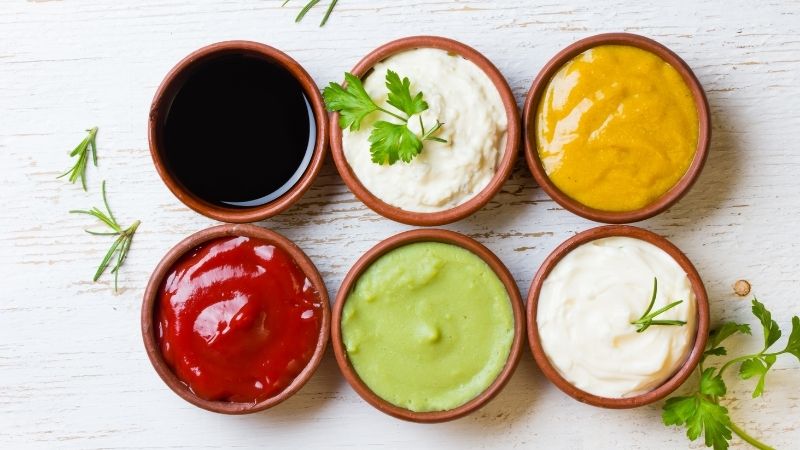 The sight of those golden arches, signifying a McDonald’s restaurant, triggers an almost Pavlovian response for many Americans. McDonald’s isn’t just fun indulgence food; the chain gives you so many options, especially for dipping sauce.

Are you looking for a complete list of sauces at McDonald’s? Are you interested in taking a walk down memory lane with discontinued ones? Or perhaps you’re wondering what kind of flavors they get around the world? Whatever the case, I’ve got you covered!

Complete List Of 9 Current Sauces At McDonald’s In [currentyear]

A standby at most restaurants, fast food, or otherwise, McDonald’s Tangy BBQ sauce is a favorite for many kids.

Each little container is only 45 calories, but they have nine grams of sugar, so you might want to limit consumption to one or two, especially with children.

Further, Wide Open Eats ranks it as the least favorite of all the sauces.

McDonald’s Sweet N Sour sauce is on a whole other level. That said, it’s the perfect accompaniment to those hot, crispy-on-the-outside-tender-on-the-inside chicken nuggets.

Also, the sauce isn’t high in calories, with just 50 per tub, but it is high in sugar, with ten grams of it in just that tiny container.

But if you love it and don’t get McDonald’s all that often, then go for it – indulge to your heart’s desire.

Of course, because the only ingredient is honey, the sugar content is high, with 11 grams per tub. But it’s only 50 calories, and there is no fat.

While it’s less sugary than some of the other sauces (just six grams), there are two grams of fat and 50 calories.

Moreover, some recognizable ingredients include distilled vinegar, mustard seed, egg yolks, turmeric, and paprika, but it does have its share of additives and preservatives.

Still, people love it. Check out this Reddit thread, where the OP does opine that the sauce isn’t quite spicy enough for their liking, but they find it otherwise tasty.

If you don’t think the Hot Mustard sauce is spicy enough, try adding a dash of sriracha or Frank’s Red Hot!)

If you live in certain parts of the U.S., ranch sauce is life. People will eat it with everything, from hot wings to carrot sticks.

For example, just 1.5 ounces contains over 200 calories and 22 grams of fat! However, the trade-off is that there are only 1.5 grams of sugar.

With that, McDonald’s describes its Creamy Ranch as having “a savory onion and garlic flavor.”

The author at Wide Open Eats is a fan, saying, “This was the first time I’d dipped a nugget in it, and I liked it a lot!”

While McDonald’s is no longer affiliated with Heinz, except in the Pittsburgh (where it’s made) and Minneapolis markets, you can still count on quality flavor.

That said, the ingredient list for McDonald’s ketchup in much of the country is very simple: tomato concentrate, distilled vinegar, and high fructose corn syrup are the first three.

Despite the high fructose corn syrup, each packet contains only two grams of sugar and a mere ten calories, and no fat.

While ketchup has very few bells and whistles, McDonald’s ketchup is great, with a nice robust tomato flavor (and no weird chemical-like aftertaste).

McDonald’s mustard is equally bland, yet therein lies its strength.

Not nearly as flashy as the Hot Mustard, the regular ol’ mustard packets boast zero calories, zero grams of fat, zero grams of sugar, and ten milligrams of potassium.

If mustard is your thing, this is a good one; order extras and keep them on hand next time you go camping!

Another sauce from McDonald’s that has inspired copycat recipes online, the Tangy Mustard, is “zesty” like Dijon but tempered with sweetness (from the honey).

Further, this sauce contains 60 calories, 3.5 grams of fat, and 4 grams of sugar, with a lengthier ingredient list that starts with water and sugar.

Also, there is distilled vinegar, mustard seed, and honey, but a host of preservatives like sodium benzoate and xantham gum.

While most people dip their chicken nuggets into the tangy honey mustard, this copycat recipe suggests trying it on sandwiches, too.

The McDonald’s Spicy Buffalo sauce isn’t the best option – despite only 60 calories per mini-tub, there are seven grams of fat – though it doesn’t have a lot of sugar or carbs.

And don’t let the “spicy” moniker put you off – true buffalo sauce lovers will tell you it’s not that hot (to appeal to the masses, no doubt).

However, tasters did approve of the overall flavor and found it quite tasty.

There are a few off-menu sauce hacks at McDonald’s that you can try if you’re looking for flavors not quite represented by the list above.

First, who doesn’t love dipping their fries in the sauce that squishes out of a Big Mac? Did you know you can just ask for a side of Big Mac sauce?

Because this is a special request, you can’t order it with the app, but if you’re going through the drive-thru or inside to order, try giving it a shot.

Further, it’s the same with the tartar sauce that goes on the Filet-O-Fish (which is in restaurants year-round).

Ask for a side or two when talking to someone face-to-face (or through the speaker).

There are quite a few discontinued sauces at McDonald’s, including sauces the company puts in restaurants, removes, and then sometimes brings back.

That said, Delish has a comprehensive list of discontinued sauces, including:

McDonald’s is always innovating and creating new sauces, and customers can’t wait to see what the fast-food chain comes out with next!

With tens of thousands of restaurants worldwide, you didn’t think McDonald’s was serving up the same foods in India as in the U.S., did you?

No, indeed, and while some menu items certainly translate no matter where you are in the world, McDonald’s also tailors food to specific countries and regions.

For example, here are four examples of sauces that McDonald’s has developed for its international consumers:

What’s The Most Popular Sauce At McDonald’s?

Tastes vary, of course, but on the whole, McDonald’s Sweet N Sour and Honey Mustard sauces seem to be the most popular.

For Sweet N Sour, Devil’s Advocate gave it a 9.25/10; TFM.com placed it first, and Wide Open Eats put it second.

And for Honey Mustard, Devil’s Advocate gave it a perfect 10/10, TFM.com put it in third, and it nabbed the top spot at Wide Open Eats.

If you’ve never had either before, this is your sign to head to McDonald’s and grab some chicken nuggets for dipping.

How Much Are Extra Sauces At McDonald’s?

Extra sauce at McDonald’s is free! Gone are the days of paying 25 or 50 cents for additional sauce containers.

With that, you can either ask the person taking your order or navigate to the Condiments section if you’re using the app.

There, you will see all the condiments McDonald’s offers (not just the sauces); and you can add just about as many as you want in as many different flavors.

Further, this is especially great if you have a favorite type!

Is Big Mac Sauce The Same As Thousand Island Dressing?

A common question, and while the two are quite similar, they are not the same.

However, the two are close, so if you’re in a pinch, you could likely swap out one for the other, and it wouldn’t make that much of a difference.

Check out the recipes this commenter on a Quora thread posted, showing how Big Mac sauce and Thousand Island dressing are similar but not identical.

To know more, you can also read our posts on McDonald’s ketchup, what is Big Mac sauce, and the biggest McDonald’s burger.

McDonald’s currently has a set line-up of nine different sauces, all of which are tasty in their own way.

But, in true innovator fashion, the world’s largest and most popular fast-food chain never rests easily on its laurels. You can bet McDonald’s will come out with something new very soon.