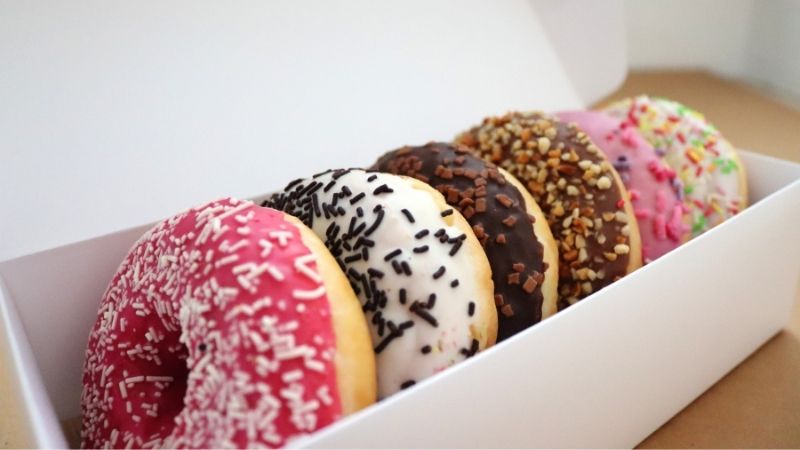 Over the last seven decades, Dunkin’ has been renowned as the world’s leading restaurant chain for offering different types of freshly baked donuts on its menus.

Finding the best donut at the quick-service restaurant franchise can be hard to crack since donuts come in plenty of colors, sizes, and flavors.

So, what kind of donuts does Dunkin’ have? I did extensive research about this, and this is what I discovered!

Table Of Contents show
1 What Kind Of Donuts Does Dunkin’ Have In 2022?
1.1 Top 10 Popular Donuts At Dunkin’ Donuts
1.2 Conclusion

Dunkin’ Donuts has different donut sizes and flavors, from plain old-fashioned donuts to intricately designed donuts in 2022. In addition, Dunkin’ occasionally introduces new limited edition donuts on its menu. Thus, you’ll always have new donuts to try out at the multinational coffee and donuts company, even if you’re a long-time Dunkin’ customer.

To find out more about Dunkin’s most popular donuts and which beverages they perfectly pair with, keep scrolling!

Since Dunkin’ Donuts has many types of donuts, it can take a lot of trial and error to find the perfect dessert that matches your taste buds.

However, you don’t have to go through all that trouble since I’ve compiled the most popular donuts at the restaurant.

Also, the donut is a great dessert to devour with your favorite beverage when craving one of the classic donuts at the fast-food chain.

Since the chocolate frosted donut is pretty decadent, the dessert pairs well with a cup of fresh whole milk or steaming coffee.

Besides glazed donuts being one of the oldest donuts at Dunkin’ Donuts, it’s one of the customers’ favorite desserts at the multinational coffee and donuts company.

This simple, fluffy, and light donut comes dipped in a sugary glaze, making it a famous bite among Dunkin’ customers with a sweet tooth.

However, one downside about this donut is that it’s very sticky, so you’ll need to stock up a few napkins to clean your fingers after devouring it.

Still, the donut pairs well with a cup of steaming hot chocolate from Dunkin’.

As its name suggests, the Dunkin’ powdered sugar donut is a snowball-like donut made of a white cake base and rolled in powdered sugar.

That said, this deliciously sweet Dunkin’ donut is a perfect treat, especially during the wintertime festivities, if you have a sweet tooth.

Also, although the dessert is dusted in powdered sugar, it has a balanced sweetness that’s not too rich to give you a stomach upset.

Nevertheless, its sugary coating can leave your mouth dry, so the dessert pairs well with a hot beverage.

If you’re craving something fruity, the Dunkin’s jelly donut is specifically baked for your taste buds.

That said, this donut comes with a soft, crispy exterior and a gooey raspberry filling on the inside for a deliciously refreshing bite.

Moreover, Dunkin’ Donuts offers different types of jelly donuts, with the standard one being less sweet and, thus, a perfect option if you want something light.

Alternatively, if you like your donut sweet, you can order a Dunkin’ glazed jelly donut since it has a fruity and gooey filling in the center.

The strawberry frosted donut comes with a vibrant pink frosting and colorful rainbow sprinkles making it a camera-perfect dessert.

The pink frosting, in turn, gives the Dunkin’ donut a creamy and full-bodied strawberry flavor that goes well with virtually any drink.

In addition, it’s creamy frosting, crunchy sprinkles, and soft white cake base give the donut a good combination of textures.

Thus, if you enjoy the fruitiness of the Dunkin’ jelly donut, you should try out this strawberry frosted donut as well.

Dunkin’s blueberry cake is a purple-colored donut that features blueberry chunks and batter, giving it a unique flavor, appearance, and texture.

Also, the donut comes with a light sugary glaze that gives the dessert an extra touch of sweetness.

Boston Kreme is a rich and filling donut offered at Dunkin’ Donuts stores that features a sweet, gooey center.

Further, this dessert is filled with a creamy and rich custard filling at the center that oozes out when you bite into it.

To cap it off, the Boston Kreme donut comes with a fudgy chocolate topping for an extra kick of sweetness.

Lastly, you can devour the delicious dessert as an evening treat or a hearty breakfast to satisfy your sweet tooth for a couple of days.

Many Dunkin’ customers are often confused between Boston Kreme and Bavarian Kreme, but the two donuts are slightly different.

For instance, Boston Kreme features a chocolate topping, while the Bavarian Kreme is dusted with confectioners’ sugar.

French Cruller is a textured donut offered at Dunkin’ Donuts with a crispy exterior and a soft, white cakey interior.

That said, the crispy dessert comes with a solid sugary glaze coat and has a unique shape that makes it stand out among Dunkin’ donuts.

Besides the aesthetics, its uniquely shaped ridges help the donut hold onto its sweet glaze coating and make it easy to tear it apart.

Also, the French Cruller donut pairs perfectly with a French Vanilla Swirl Coffee cup since it tastes fantastic when dipped in the steamingly hot drink.

The Dunkin’ old-fashioned donut is a simple, subtly flavored dessert with a crispy exterior and a white cake base.

Unlike most Dunkin’ donuts, this donut is a perfect dessert for people who don’t have a sweet tooth since it’s not coated with any sugary toppings.

Nevertheless, you shouldn’t let the old-fashioned donut’s plain appearance deceive you since it still has plenty of sweet taste.

Also, the good thing with this simple, plain, but delicious dessert is that it goes well with any beverages offered at the fast-food chain.

Still, other popular donuts offered at Dunkin’ Donuts include:

To learn more, you can also read our posts on who makes Dunkin’ coffee, does Dunkin’ Donuts do pup cups, and what caramel does Dunkin’ use.

Dunkin’ offers a wide variety of crumbly, chewy, and rich donuts in its stores worldwide, giving you plenty of options to consider.

From the simple classic donuts to the intricately designed donuts, it’s easy to find a dessert to satisfy your craving at the quick-service restaurant chain.

Lastly, the Dunkin’ donuts list outlined above will go a long way in helping you choose the perfect treat for you and your family!