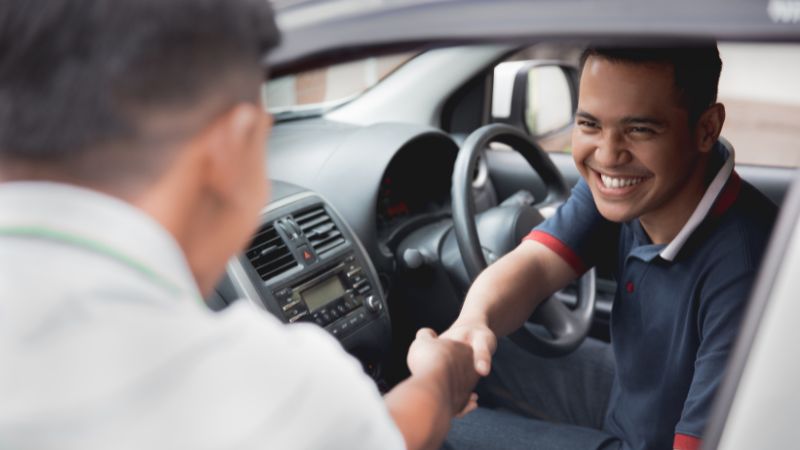 Whenever you use Uber you have the option to leave the driver a rating at the end of the ride that sums up your feelings about it.

If you feel that you can’t leave an honest rating because you’re afraid that the driver might know it’s you, here’s what you need to know!

Can Uber Drivers See Your Rating In 2022?

Continue reading to find out all you need to know about rating drivers on Uber, including what they actually see about you, how the ratings system works and more!

How Do Ratings On Uber Work?

Ratings on Uber work by allowing you to give a score between one and five stars depending on your experience during the ride.

When you issue a score, it’s added to the driver’s ratings history and is used to calculate an average based on the most recent 500 ratings.

When the driver looks at their ratings, all they see is customer feedback, their average and how many times they’ve received which score.

For example, if they’ve received fifty 5-star reviews, they’ll see the number 50 next to 5 stars.

If the driver still hasn’t reached 500 trips their rating will use the average of their total trips at the time, which is why it fluctuates so much when they first start out.

Using this information, a driver that always pays attention to their rating can use clues to find out who gave them a negative score.

For example, if they have an unpleasant experience on a ride and their score goes down soon after, they can determine that that’s where it happened.

If a rider gives a rating of 4 stars or below, they’ll be asked to provide more detail on the decision, and this goes into the driver’s feedback section.

What Do Uber Drivers See About You?

Uber drivers only see your first name, where you’re being picked up, your destination, the length of the trip and your rating.

Until they accept a ride request, however, they can only see your pickup and dropoff locations, and the distance they’d have to travel.

They can’t see your real phone number because the app uses a two-way masking system that generates numbers when they try to contact you.

Moreover, the Uber app deletes your information on the driver’s side after the trip so they won’t have a record of where they picked you up or dropped you off unless they entered it into a different service like Google Maps.

Uber drivers can’t see your tip before rating you because they only have access to this information after the trip via the receipt sent to their account.

When you end the trip, your information is deleted from the driver’s side, including the ability to rate you.

They also don’t see the name of the person that left the tip from the info in the receipt so it would be difficult for them to tie it to you unless they checked immediately or committed details of the trip to memory.

Why Do Uber Drivers Rate Me Low?

One of the outcomes of giving an Uber driver a low rating is them giving you a low one in return if they notice.

If Uber drivers consistently give you a low rating, it might be because:

You can use this information to ensure your Uber rides go more smoothly and reduce the chances of you and the driver leaving each other negative ratings.

Uber driver ratings matter because they determine how a driver is perceived by the riders they’re matched with.

A driver with a low rating is avoided because at best they’re difficult to deal with and, at worst, they pose a danger to the riders.

Do Uber Drivers Get Fired For Low Ratings?

Uber drivers essentially get fired for low ratings when their account gets deactivated but the threshold for this varies by city.

If a rider leaves a low score and gives a reason that was beyond the driver’s control, like high prices, Uber says that this doesn’t go towards their average rating.

If a driver’s account is in danger of deactivation due to low ratings, they’ll get a notice about it first and, if they can’t improve it, then they’ll lose access to the platform.

To find out more, you can also read our posts on Uber One, is Uber 24/7, and can Uber be booked in advance.

Uber drivers can’t see your rating because the system is anonymous but they can use context clues to guess where a negative review came from.

If an Uber driver consistently gets low ratings then their account might get deactivated after they receive a warning beforehand.