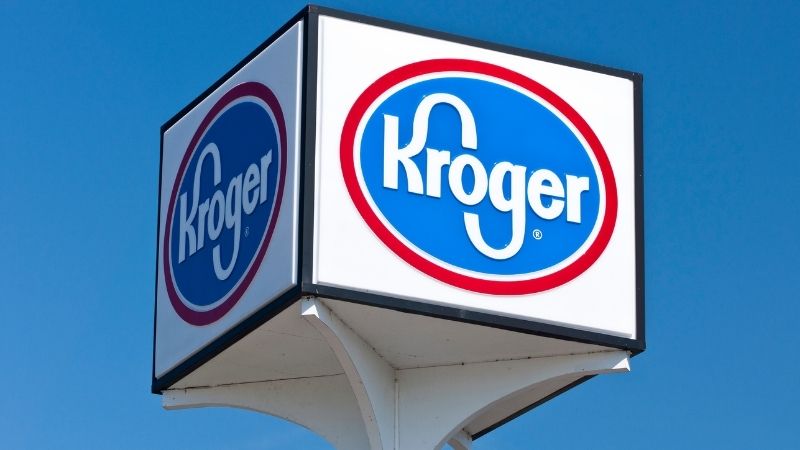 Kroger is the largest supermarket chain and the second-largest general retailer after Walmart in the United States, thanks to the high number of subsidiaries. While some of the companies like Fred Meyer and Fry’s are well known, you might find some of the subsidiaries surprising.

That being said, here are 15 of Kroger’s largest subsidiaries across the country. Each of these stores offers distinct products and services. However, most of them deal in almost similar products, making it easier to consolidate operations for the ever-growing Kroger!

The Most Well-Known Companies Owned by Kroger In 2023

Since its establishment in 1883, Kroger has been acquiring some of the top grocery and retail stores as part of its expansion plan. Kroger’s family of companies includes multi-department stores, supermarkets, and marketplace stores in 2023. This list includes Fred Meyer, Dillons, Fry’s, and many other companies.

If you are curious about how big Kroger is, especially the subsidiaries under its management, I have compiled a list of all the companies, so keep reading to learn more!

Fred Meyer was the biggest merger for Kroger in 1999 because Fred Meyer also owned Food 4 Less, QFC, Ralphs, and Smith’s at the time.

Additionally, Fred Meyer also has a pharmacy and health section where customers can get health and wellness, beauty and personal care products, as well as vitamins and supplements.

This $13 billion merger with Fred Meyer created a supermarket chain with the widest variety of formats and broadest geographical coverage.

Kroger acquired Kansas-based grocery supermarket Dillons in 1983 in exchange for stock valued at about $750 million.

This merger played a critical role in the growth of the Kroger brand.

Because of the deal with Dillon, Kroger became a coast-to-coast operator specializing in food, drugs, and convenience stores.

As a division of Kroger, Dillons offers operates grocery stores in different states, including Kansas, Manhattan, Wichita, and Topeka.

Since the merger, Dillon operates like the Kroger chain of supermarkets and offers different types of products.

This Dillon merger also brought other retailers into the Kroger family.

Fry’s and Kroger became connected after Kroger merged with the American grocery supermarket chain Dillons in 1983.

Fry’s was sold to Dillons in 1972; therefore, when Dillons merged with Kroger, it automatically became a part of the Kroger group. However, Fry’s kept its brand name despite the merger.

As part of the Kroger family of companies, Fry’s is the dominant brand in Arizona.

In fact, Kroger rebranded most of Smith’s Food & Drug Centers to Fry’s. Currently, Fry’s has over 120 locations across the United States, and most of them are located in Arizona.

Ralphs is a division of supermarket chain Kroger. As one of the largest subsidiaries of Kroger, it was acquired as part of the merger with Fred Meyer.

Fred Meyer purchased Ralphs in 1997 as part of its expansion plan. Therefore, Kroger became Ralph’s owner after merging with Fred Meyer in 1998.

As of March 2023, there were 189 Ralph locations across the U.S, and most of them were located in California.

This merge with Roundy’s expanded Kroger’s reach to the northern Mid-West and Mid-Atlantic states in the United States.

Similar to Fry’s, Food 4 Less was also acquired by Kroger as part of the merger with Ralphs. Food 4 Less merged with Ralphs in 1995 to offer customers more variety of products.

By adding Food 4 Less to its portfolio of companies, Kroger expanded its presence and had more stores in different locations across the U.S.

Customers can access Food 4 Less services via the website, such as shopping online, getting coupons, store locator, and online food orders.

Kroger acquired the 212-store supermarket chain, Harris Teeter, in a deal valued at about $2.5 billion.

According to the Kroger CEO, the acquisition in 2014 happened because the company foresaw Amazon.com getting into the grocery store business.

Therefore, Kroger made a move before Amazon bought Whole Foods in 2017.

Smith’s is a supermarket chain that was established in 1911 and became a subsidiary of Kroger via Fred Meyer in 1997 in a $700 million stock deal.

Roundy’s Supermarkets has been a subsidiary of Kroger since 2015.

As a leading grocer in the Midwest, Roundy’s operates about 150 retail grocery stores, which became part of the Kroger brand.

Most of the stores under Roundy’s operate under different banners in Illinois and Wisconsin. They include Pick ‘n Save, Metro Market, and Mariano’s.

Quality Food Centers, or QFC, is a supermarket chain with locations in Washington, Oregon, and Portland.

As a subsidiary of Kroger, QFC was sold to Fred Meyer in 1997 before the merger with Kroger in 1998.

Like other stores under the Kroger family of companies, QFC also stocks a variety of products from food to furniture and bath items.

King Soopers is a supermarket brand headquartered in Denver, Colorado. This supermarket became a part of Kroger through Dillons.

Dillon companies had bought King Soopers in 1957; therefore, when the company was bought out by Kroger, King Soopers automatically became part of Kroger.

5 of the Most Lesser-Known Companies Owned by Kroger

While most of the mentioned brands are well-known, there are other smaller companies that are still part of the Kroger family of companies, such as the following:

City Market represents Kroger’s brand in the Rocky Mountains. This supermarket chain is headquartered in Colorado.

Dillon companies acquired City Market in 1969; therefore, it became part of the Kroger family of companies after Kroger merged with Dillon.

Therefore, Gerbes became part of the Kroger family thanks to the Dillon-Kroger merger in 1983.

Mariano’s is a grocery store chain owned that operates in the Midwestern. Like other supermarket chains and grocery stores, Mariano’s deals in various foods and beverages.

In addition, you can shop for kitchen and dining items, furniture, and groceries. Customers can shop online and get free shipping and fuel points.

Metro Market is one of the retail banners under Roundy’s, a subsidiary of Kroger. This smaller store concept was launched in 2004 and is prominent in areas such as Milwaukee and Madison.

This retail store competes with the likes of Whole Foods Market and Trader Joe’s.

However, today, they have evolved and now operate as traditional supermarket chains where customers can purchase different types of products.

To know more, you can also read our posts on Kroger competitors, Kroger SWOT analysis, and what is Kroger.

Since its establishment 140 years ago, the Kroger company has been innovative and continuously acquired brands to expand its presence across the U.S.

As the country’s largest grocer, Kroger now has about 2,800 stores in 35 states, operating under different names.

These stores offer a one-stop-shop experience for customers because they have everything from organic vegetables, basic grocery staples, hot meals, natural foods, in-store pharmacies, and fuel centers in different locations.