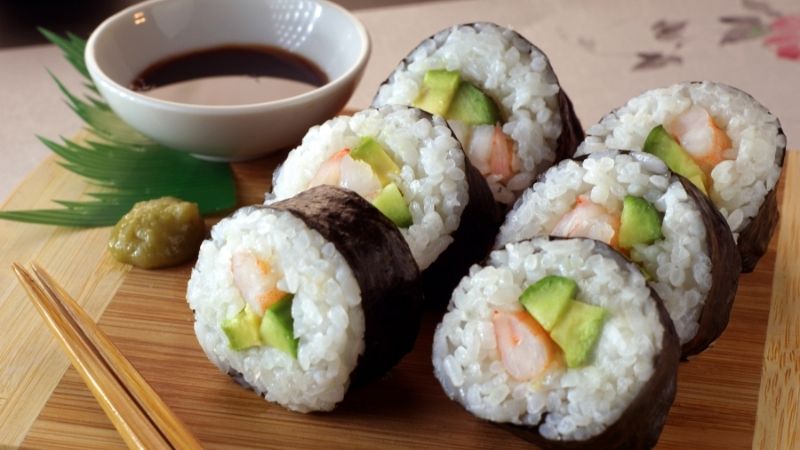 Today, sushi has become so popular that you can not only buy it from sushi restaurants but even grocery stores. But does that include retail supergiant Walmart?

The world’s second-largest retailer certainly seems to sell everything under the sun, but what about sushi? Here is what you need to know if you’re craving Japanese cuisine and want to know if you can buy it from Walmart!

Table Of Contents show
1 Does Walmart Sell Sushi In 2023?
1.1 What Type Of Sushi Does Walmart Have?
1.2 Who Makes Moji Sushi?
1.3 How Much Is Walmart Sushi?
1.4 Where Is Sushi Located In Walmart?
1.5 Should You Buy Sushi From Walmart?
1.6 Conclusion

Walmart does sell sushi, both fresh and frozen, in many of its stores in 2023. Under the brand name Moji, Walmart carries a small assortment of popular rolls, such as California and spicy crab. Though prices are comparable to other grocery stores, the quality is largely reviled for its inauthenticity.

Let’s look at what types of sushi Walmart sells, how much you can expect to pay for it, what critics have to say about the quality, and who makes the Moji brand. Keep reading!

What Type Of Sushi Does Walmart Have?

Walmart sells both a “fresh” version of sushi, located in the deli area, as well as a frozen kind in its freezer sections.

Additionally, customers get 10 pieces per package, and the average price is about $6 each.

In addition to the pieces of sushi, Moji rolls come with packets of wasabi, soy sauce, and ginger.

You might also find Okami brand sushi in your local Walmart, although it does not appear to be as widely available as the Moji type.

(It’s important to note that Walmart’s Moji sushi is not made in-store; there is no sushi counter in the deli area where people are making it. It comes prepackaged to stores.)

Furthermore, Walmart’s frozen sushi comes mainly from the Banzai brand, with a shrimp and avocado roll and a spicy crab roll.

These packages come with 15 pieces per box, soy sauce, and wasabi packets, and they require thawing (safest in a refrigerator) before serving.

The Moji sushi brand is a subsidiary of Trident Seafoods.

Trident Seafoods is a family-owned and operated business with fishing communities all along the ports of Alaska. They also catch and sell fish like cod, pollock, halibut, rockfish, and salmon.

However, you can see from their website, that Moji sushi arrives at stores assembled and frozen.

The stores then thaw them out and place them in the coolers for sale.

How Much Is Walmart Sushi?

Walmart sushi is certainly more affordable than what you would get in a Japanese-style restaurant.

Additionally, the Moji brand sushi averages out to about $6 per package; depending on your location, it might be a bit more or a bit less.

However, the frozen Banzai sushi is just a bit more, around $6.50 – but remember, you’re getting 15 pieces total.

These prices are lower than other grocery store sushi, like at Giant Eagle where they can run between $7 to $10 per package.

Where Is Sushi Located In Walmart?

The fresh sushi is located in your Walmart’s deli and prepared foods area, where you might find premade sandwiches, salads, and other items that must remain refrigerated.

Walmart’s frozen sushi is located in their freezer section, usually closer to the back of the store.

Should You Buy Sushi From Walmart?

Walmart’s sushi has not received high praise from either the press or many Walmart customers.

It was even voted the worst grocery store sushi in a poll by Mashed, with nearly 55 percent of respondents giving Walmart the dubious title.

This Redditor had something to say about it:

“Purchased this a while back. Ate 2 pieces and threw the rest away. The texture and taste were that of a mini sponge that had been soaked in old fish water. Never again…”

However, despite all the bad press, other Redditors were a lot kinder.

u/SapphireEcho said, “I’ve actually had it. Multiple times. Of course never any of the raw stuff, just the imitation crab.”

They continued, “If you get it when it’s fresh it’s actually not so bad! Hell for $5 it hits the spot…”

Another user commented, “I used to get these when they wouldn’t sell and would mark them down to $2. Acceptable for that price for what it is.”

To know more, you can also read our posts on things to know before buying Walmart rotisserie chicken, buying donuts from Walmart, and is Walmart meat good.

Walmart sushi comes fresh in the deli area or frozen, in the freezer sections with the other seafood products.

Inexpensive and convenient, Walmart’s sushi options might not be the most authentic, but some of its fans think it hits the spot when they’re having a craving and don’t want to spend a lot of money.