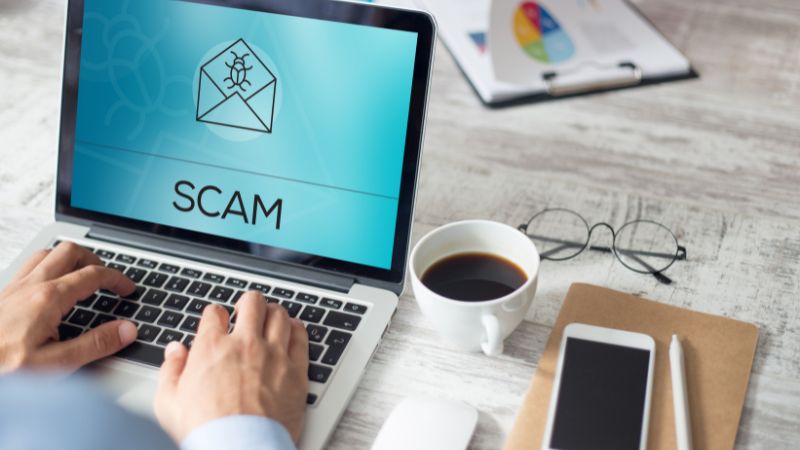 Home Depot is a multinational company that is currently the fifth-largest retailer in the entire world, which makes it prime for scammers and fraudsters to target.

Thanks to its bustling ecommerce activity, the Home Depot name and brand has been used, and continues to be used, for multiple scams throughout the world. So, here are eight Home Depot scams to be aware of so that you don’t get taken in by fraudulent activity!

In December 2021, TrendMicro.com reported that a new website, mimicking Home Depot in looks and feel, had appeared.

The catch: Its URL was moonelegant.com, and it was a total scam.

There were numerous signs, including the sales of items for ultra-low prices (too good to be true) and the website only being registered in September 2021.

As well, the site was without a working customer support system, and there wasn’t a business address attached.

Nevertheless, customers actually placed orders on MoonElegant.com and reported that they didn’t receive a confirmation email or any tracking information.

Overall, the site is a complete scam, designed to take your credit card information and your money and give you nothing in return.

2. Home Depot ‘We Have a Winner’ Scam

Don’t fall prey to Home Depot smishing attempts, like the “We have a WINNER” text.

By using the Home Depot name at the beginning, the scammers are obviously trying to lure people into a false sense of security.

Don’t click on the link that follows; at worst, it’ll install malware on your device, and at best, it’ll reroute you to a website that seeks to gain your sensitive financial information.

And, although it says “Send 0 to STOP,” do not comply; this is just a ruse to see if there is an actual human at the other end of the phone.

If you send 0, the messages won’t stop, but will likely get worse.

In the same vein as the “We have a winner” text, the $100 credits text aims to get you to click on a link so scammers can get your information.

If you look at the text here, your first indication that something isn’t right is the spelling of Home Depot, as Home-Depot.

While Home Depot does send out texts, you generally have to sign up for them, as in the case of SMS notifications that your online order is ready.

Also, Home Depot – and many other major corporations – simply don’t give away $100 credits for no reason.

Americans, Brits, and South Koreans were subject to emails claiming to be from Home Depot, which promised an “exclusive reward” in exchange for a 30-second survey.

The first clue is in the email address from which the message was sent, which is not Home Depot.

The second is the use of Comic Sans as the font for the email’s body headline, which no self-respecting corporation would do.

If you clicked on the link, it would take you to a website where you fill out a form and then fill out your credit card info to “cover a nominal shipping fee for the prize.”

As BitDefender.com says, you should never click on links in emails when you don’t know the sender.

As well, if you want to check out if a prize is legit, head to the real website, HomeDepot.com, for information.

While searching the Facebook Marketplace for patio furniture, two people instead found an ad, claiming to be the Home Depot.

It was for drastically reduced patio furniture, which the two jumped on, placing an order, but then receiving a PayPal receipt in another language.

These two got scammed by fake Facebook Marketplace ads, and they’re not alone.

So, if you’re looking at Facebook Marketplace and you see an ad from Home Depot, consider one thing first before clicking on the link – is the price too good to be true?

If you do end up clicking on the ad and going to the website, look at the URL. If it’s not HomeDepot.com, it’s not the company or a legit site.

Check to see if you notice any spelling or grammatical errors, which wouldn’t occur on a real business’s website.

And finally, use a credit card or PayPal to make the purchase, because those are the easiest forms of payment with which to prove you were scammed and receive the money back.

The man in Tempe, AZ apparently scammed Home Depot out of hundreds of thousands of dollars, by swapping fake $100 bills for the real thing and pocketing them.

He got away with this for four years, even depositing the fake money into a Wells Fargo Bank.

When you enter the term “Home Depot” into the Google search bar, you expect the first results to be HomeDepot.com, right?

Well, for a time, the first result was an ad that appeared to be for the site, HomeDepot.com, but actually opened a portal to a tech support scam.

If you fell for the ad, you were redirected several times before landing on a site that opened a Print dialog box over and over again, which made it virtually impossible to close the page.

But once you did close it, a new window popped up, encouraging you to call a number for tech support, because your computer is “compromised.”

Once you call that number, “tech support operators” (actually scammers) will guide you toward letting them take control of your computer remotely.

Afterwards, they install a Lock My PC program and try to sell you a program to unlock it.

To know more, you can also read our posts on Home Depot interview questions, Home Depot shoplifting policy, and Amazon vs Home Depot.

The Home Depot has been the subject of many scams over the years, and because of thieves’ success, they continue to this day.

Therefore, be wary of any email or text claiming to be from The Home Depot, and instead of clicking on links, visit HomeDepot.com directly.