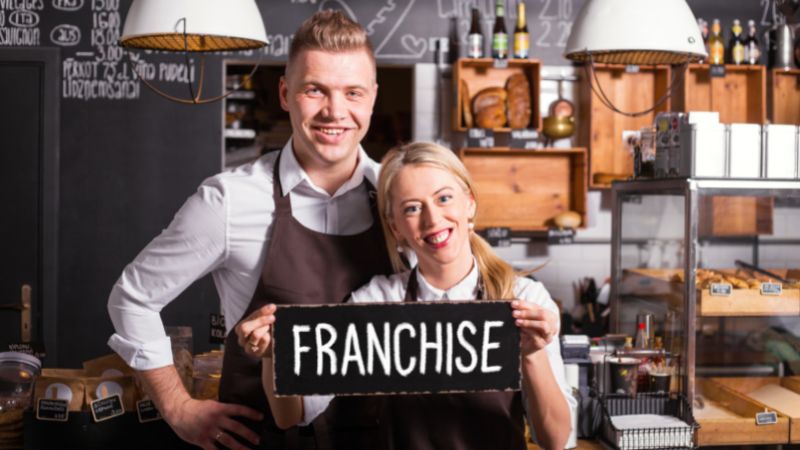 Chick-Fil-A has consistently topped the list of one of the most successful restaurants in the US, with more than $11 billion in sales.

The fact that Chick-Fil-A has 2,793 outlets located in 47 states triggers questions such as, is Chick-Fil-A a franchise? I looked into the matter, and here’s what I discovered!

Is Chick-Fil-A A Franchise In [currentyear]?

How Much Does It Cost To Open A Chick-Fil-A Franchise?

Further, the breakdown of the initial cost of opening a Chick-Fil-A franchise is as follows:

However, as per the company’s policies, the parent company is responsible for covering the opening expenses, while the franchisee is only expected to pay the $10,000 franchise fees.

Furthermore, Chick-Fil-A does not require the franchisees to showcase the minimum net worth or liquid assets.

As a result of the reduced expenses, Chick-Fil-A has become one of the least expensive major fast-food chains since the company covers almost all the start-up costs.

How Do You Open A Chick-Fil-A Franchise?

If you are interested in opening a Chick-Fil-A restaurant, here are the steps to owning one:

The first step to owning a Chick-Fil-A franchise is submitting an online application through the company’s franchise page.

That said, the page has three hyperlinks that direct interested franchise candidates for US, Puerto Rico, and Canada applications.

Usually, the links direct you to registration pages where you create your profile and submit it to the company.

Additionally, it is important to note that one cannot simultaneously apply for opportunities in the US, Puerto Rico, and Canada.

As you submit your application, you must know that Chick-Fil-A requires full-time availability since the parent company expects operators to be actively involved in daily operations.

Furthermore, you have to demonstrate previous experience in leadership and management adequately.

If your application meets the selection criteria and you are selected, the company will reach out to you and schedule an interview.

Due to the low franchisee acceptance rate, it is usually critical that you prepare adequately for the interview.

Also, it is always important to remember that Chick-Fil-A seeks a candidate with an entrepreneurial spirit since the company covers most of the start-up costs.

Moreover, the hiring team may reach out to your family, friends, and past employer to verify your credentials and character.

3. Review Of The Franchise Agreement

If you pass the interview, the franchisor will share a franchise agreement and the Franchise Disclosure Document (FDD).

So, always ensure that you review it closely to understand the document’s implications.

As part of the process, Chick-Fil-A operators must attend and complete a multi-week training program that will teach them all elements of starting and running the business.

5. Grand Opening Of The Franchise

The last step of opening the franchise is preparing for a smooth and successful grand opening. So, ensure that you prepare yourself and your staff for the big day!

What Are Chick-Fil-A’s Expectations Of Opening A Franchise?

Since the success of Chick-Fil-A is correlated to the drive and passion of individual businesses, the parent company outlays some expectations for franchises and franchise owners.

With that, below is Chick-Fil-A’s Franchise check-list:

Also, Chick-Fil-A expects a holistic commitment to owning and operating the business to boost company sales.

Since the business is part of the quick-service restaurant industry, the franchisee must demonstrate a commitment to serving customers.

Therefore, the parent company expects franchisees to exhibit a passion for serving great food and offering exceptional hospitality within a fast-paced environment.

Since the franchisees are in charge of all aspects of the business, they must anticipate complexity and risk.

That said, the franchisee needs to understand that the business’s success and return on investment are dependent on their hard work, leadership effectiveness, and business acumen.

Moreover, even with such elements put into play, the business’s success might not be guaranteed.

The process of selecting a Chick-Fil-A franchisee is always highly selective.

With that, Chick-Fil-A ensures that it tales all candidates through an intensive and lengthy selection process to filter out the best.

What Is It Like To Operate A Chick-Fil-A Franchise?

Once a franchisee opens a Chick-Fil-A franchise, the parent company charges 15% royalty and 50% pretax of the profits remaining.

Furthermore, Chick-Fil-A prohibits most franchisees from opening up multiple units, which limits the franchisees’ potential profits.

According to the parent company, the limitation to opening up multiple units enables franchisees to get involved in the restaurant’s daily operations intimately.

Also, Chick-Fil-A covers all expenses involved in opening the restaurant, and the franchisor owns the real estate, equipment, building, and virtually everything else within the store.

On the other hand, the franchisee is simply operating the business and is expected to run the business in a hands-on manner.

How Much Does A Chick-Fil-A Franchise Owner Make?

A Chick-Fil-A franchisee makes approximately $4.2 million per store, which is above other direct competitors such as KFC ($1.2 million) or McDonald’s ($2.8 million).

However, after deducting the royalty fees and other operating fees, the figure left is much less than $4.2 million and approximately $200,000 a year.

In conclusion, Chick-Fil-A’s business model operates on a franchise model. Also, a franchisee is only required to pay $10,000 as the franchise fee, while the company covers other expenses.