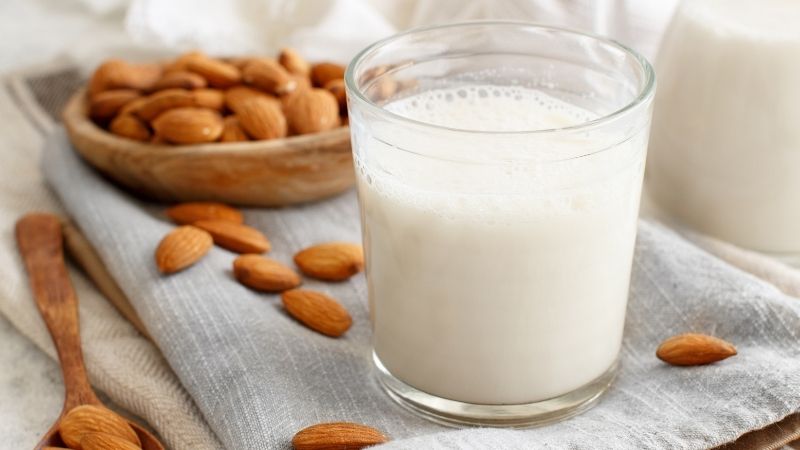 Starbucks is the go-to coffee choice for millions of people around the world, and as tastes and food trends have evolved, so has the company’s selection of ingredients. That includes a wider array of dairy milk substitutes.

But in addition to being non-dairy, is Starbucks almond milk sweetened? It’s a delightful addition to any drink, but does it add sugar? Here’s what you need to know!

Is Starbucks Almond Milk Sweetened In 2022?

Starbucks almond milk is sweetened, a common trait with most almond milk as of 2022. The sweetener, which appears to be simply added sugar, tacks on about three grams of sugar to the overall beverage, and therefore does not add a substantial amount. Indeed, Starbucks’ almond milk contains the lowest amount of sugar of all its milk options.

To learn more about the sugar content of Starbucks’ almond milk, versus all other milk options, as well as whether or not there is carrageenan present, and if the almond milk is Keto-friendly, keep reading!

Does Starbucks Almond Milk Have Sugar?

Starbucks almond milk does indeed contain sugar, between three or four grams depending on what size beverage you get.

PopSugar investigated the ingredients in Starbucks’ almond milk and came away with this list:

It does look like a lot of ingredients, versus all-natural almond milk that simply consists of just almonds and water.

But this list is quite close to the kinds of almond milk you’d find in grocery store coolers.

If you know anything about ingredient labels, you know that they are also listed in order of quantity.

So the ingredients at the top make up the majority of the product. And those, thankfully, are almonds, water, and sugar.

Consider, too, how little sugar there is in Starbucks’ almond milk, which means there are even fewer of the other scary-looking (though very common) ingredients present.

Let’s look at how that sugar content compares to Starbucks’ other milk options.

While some people might prefer totally sugar-free milk in their beverage, that is not going to be a fulfillable order at Starbucks.

That’s because almond milk actually contains the least amount of sugar of any of the milk options the chain offers.

In fact, the two percent, whole, and soy milk all contain 14 grams of sugar.

Therefore, the choice is clear: while you can’t avoid sugar in any of Starbucks’ milk-based beverages, you can choose almond milk to keep the amount at its lowest.

Does Starbucks Almond Milk Have Carrageenan?

You might be wondering, what’s so bad about carrageenan?

Well, the naturally occurring thickener is derived from a red seaweed called Irish moss, and it’s used in all kinds of foods to improve the texture.

That doesn’t sound so bad, except that it has been linked with colon damage, internal bleeding, and even cancer.

However, some in the scientific community refute these findings and insist the additive isn’t bad at all.

Whatever the case may be, Starbucks drinkers don’t need to worry about it, because the controversial ingredient is not present in the coffee shop chain’s almond milk.

Keto can be difficult to maintain when you’re dining out, but luckily, if you follow this diet you do not have to give up your Starbucks.

This is because almond milk is fairly keto-friendly, though not totally (and ideally) devoid of sugar and carbs.

But the writer at Green and Keto suggests an almond milk latte, which you could also dress up with sugar-free syrups.

What Milks At Starbucks Are Unsweetened?

None of the milk options that Starbucks offers its customers are unsweetened.

They all contain at least three or four grams of sugar, and in the case of all the options except for almond milk, they contain substantially more than four grams.

However, If you’re looking for a beverage with no sugar, consider a regular coffee sweetened with Stevia or Splenda, or a plain espresso beverage, like an Americano.

Sugar is incredibly difficult to escape at Starbucks, where items like Frappuccinos can boast as much as 50+ grams.

Additionally, if you’re trying to avoid a huge sugar bomb in your Starbucks beverage, almond milk is the way to go, with only three or four grams of sugar per serving.

While Starbucks’ almond milk does contain sweetener in the form of sugar, it’s still one of the best options all-around for your lattes, mochas, and Frappuccinos.

Furthermore, at just 3 or 4 grams of sugar per serving, Starbucks almond milk is also a decent option for those following the Keto diet.