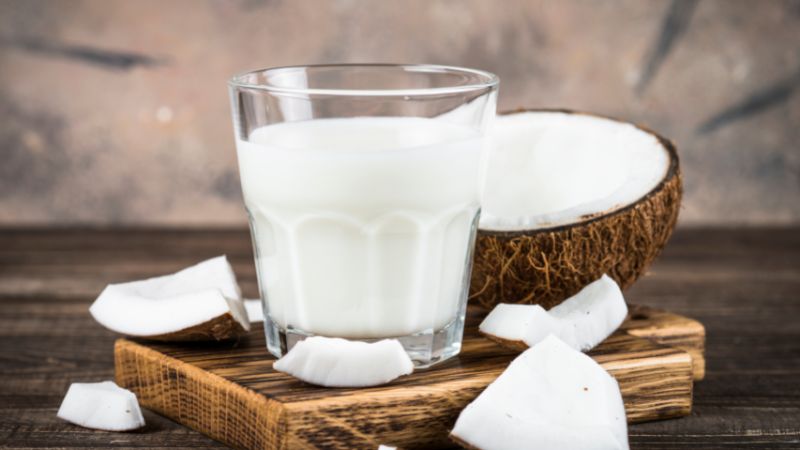 Starbucks finally introduced coconut milk as an option a couple of years ago and if you’re wondering whether it’s sweetened or unsweetened, read on to see what I found out!

Is Starbucks Coconut Milk Sweetened In 2022?

Starbucks’ coconut milk is sweetened, but it contains less sugar than any other alternative except almond milk as of 2022. This is true for plant-based and dairy options, i.e., soy, oat, 2%, whole, half and half, and nonfat milk. When placing your order, you can ask for your drink to be sweetened further with stevia and sugar.

To learn all you need to know about coconut milk at Starbucks, where it comes from and more, read on!

Does Starbucks’ Coconut Milk Have Sugar?

Starbucks’ coconut milk has sugar that comes naturally, as well as the sweeteners that the company adds in itself.

Moreover, coconut milk from Starbucks contains about ten grams of sugar in a Grande, which is about 16 ounces.

Aside from this, Starbucks’ coconut milk is sweetened using different ingredients I’ll mention in the next section, including cane sugar.

What Is In Starbucks’ Coconut Milk?

According to most sources, the coconut milk from Starbucks is the second best option out of all plant-based and dairy alternatives after its almond milk.

Also, these sources compare the number of calories and sugar in the same amount of the options available instead of the individual ingredients.

Therefore, to give you a better idea of how the options compare, here’s how much sugar is in a Tall caffe latte with no flavored syrup or whipped cream:

As for caloric content, Starbucks’s coconut milk has 180 calories in a Grande serving (16 ounces).

Moreover, a Grande-size Starbucks latte made with coconut milk contains about six grams of saturated fats.

With that, here’s how Starbucks’ coconut milk compares to the other options when it comes to calories in a plain Tall caffe latte:

So, even when you look at calories instead of sugar, coconut milk still emerges as the second best option at Starbucks after almond milk.

Where Does Starbucks’ Coconut Milk Come From?

Starbucks’ coconut milk is made using coconuts from Sumatra, a tropical island in Indonesia.

That said, like most other plant-based milk alternatives at Starbucks, the coconut milk is manufactured by a supplier that doesn’t sell it to the public.

Can You Buy Starbucks Coconut Milk?

Unfortunately, you can’t buy the coconut milk used at Starbucks, and the only way to get it is by ordering a drink containing it from its coffee shops.

As stated above, Starbucks gets the coconuts used in its coconut milk from a single source and has only one supplier.

That said, large companies that do this often pay the supplier enough money to provide them with a product that they don’t sell to the public.

Does Starbucks Have Any Unsweetened Milk Options?

In fact, coconut milk and soy milk are currently the only sweetened milk options at Starbucks.

Also, almond milk is the only non-dairy or plant-based option available from Starbucks that isn’t sweetened.

Moreover, Starbucks uses oat milk from Oatly, and the company says it’s unsweetened, but this claim has been challenged in recent years.

However, an unsweetened option does not mean that it does not contain any sugar, just that Starbucks hasn’t added any itself.

That said, the coconut milk that Starbucks uses has less sugar content than all the unsweetened options except for almond milk.

To learn more, you can also read our posts on what are Starbucks Infusions, is Starbucks almond milk sweetened, and is Starbucks iced coffee sweetened.

Starbucks’ coconut milk is sweetened, but it still has less sugar than other unsweetened options available from the coffee shops.

Moreover, almond milk is the only option at Starbucks with less sugar than coconut milk, which contains several ingredients, including cane sugar.

Coconut milk at Starbucks comes from coconuts grown in Sumatra, and the milk itself is not available to the public unless it’s used as part of a drink you buy at one of the coffeehouses.

Going by caloric and sugar content, Starbucks coconut milk is best than all the other milk alternatives available except almond milk.