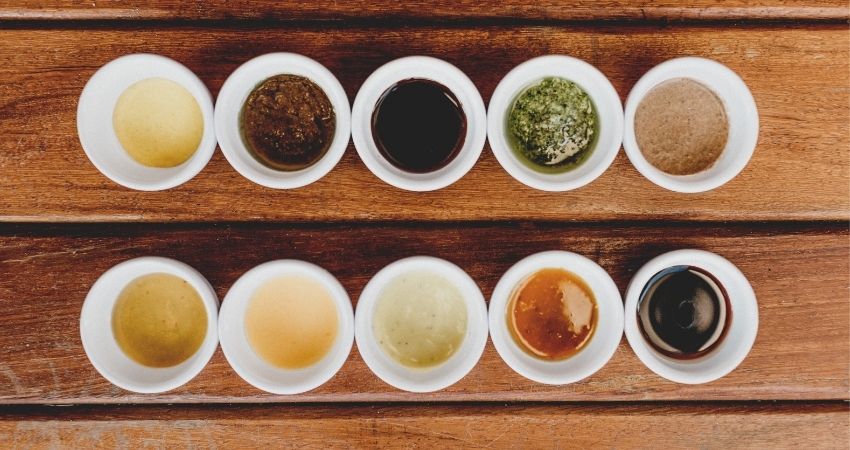 Most Chick-fil-A customers are addicted to the restaurant condiments. For quite some time now, Chick-fil-A has been ranked as a restaurant with the most-loved sauces.

As a result, most customers have gained interest and would love to learn more about the sauces. In case you are one of them, keep reading and get enlighted!

If you want to find more about the sauces available at Chick-fil-A, including the number, ingredients, nutritional values of each, the most popular sauce, and much more, keep reading!

How Many Sauces Are There At Chick-Fil-A?

According to Chick-fil-A’s main menu, the restaurant has eight sauce varieties. That said, the sauces include the following:

Chick-fil-A sauce is termed as the restaurant’s classic dipping sauce that contains notes of honey mustard and a smoky tang.

Further, the main ingredients in the classical sauce include:

Additionally, it is important to note that the Chick-fil-A sauce contains allergens such as eggs.

Chick-fil-A’s Barbecue sauce is seasoned with spices, garlic, and onion to create a rich and bold flavor.

Also, the ingredients in the Barbecue sauce include:

Additionally, the sauce contains added preservatives such as potassium sorbate and sodium benzoate. For the color, Chick-Fil-A adds caramel.

Moreover, the restaurant adds ingredients such as the smoke flavor, spice, garlic, and onion to enhance the natural flavor of the sauce.

Per serving of 28 grams, the Barbecue sauce has the following nutritional value:

The Garden Herb Ranch sauce at Chick-fil-A is a creamy buttermilk ranch sauce with flavors of savory garlic, herbs, and onions.

To create the wholesome flavor of the sauce, Chick-fil-A uses ingredients like:

As for the nutritional value, every serving size of 28 grams contains the following:

Lastly, it is important to note that the Garden Herb Ranch sauce has allergens such as eggs and milk.

The Honey Mustard sauce made by Chick-fil-A is a savory sauce with spices and a robust flavor of mustard mixed with the sweetness of honey.

Also, Chick-fil-A uses sodium benzoate as a preservative and caramel as a color additive.

Moreover, the nutritional value of Chick-fil-A’s Honey Mustard sauce for every serving of 28 grams is as follows:

The Polynesian sauce by Chick-fil-A gives customers a delicious sweet and sour sauce option that exhibits a strong and tangy flavor.

In addition to this, the sauce has modified starch, dehydrated onion & garlic, xanthan gum, propylene glycol alginate, and a natural flavor.

For the color of the sauce, Chick-fil-A uses beet juice.

As for the nutritional value, every 28-gram serving size of Polynesian sauce has the following constituents:

The Sriracha sauce is a sweet and tangy Chick-fil-A sauce made with chili peppers to provide a spicy twist.

As for the nutritional value, every 28-gram serving size of Sweet and Spicy Sriracha Sauce is as follows:

Chick-fil-A’s Zesty Buffalo sauce is described as a flavorful hot sauce with a smooth and bold flavor.

Also, the sauce has whey protein concentrate, potassium, and sodium benzoate added as preservatives, and calcium disodium EDTA added to protect its flavor.

Moreover, annatto and turmeric are added to protect the sauce’s color.

For every 21-gram service size of Chick-fil-A’s Zesty Buffalo sauce, there are the following nutritional constituents:

Finally, it is important to note that the Zesty Buffalo sauce has allergens such as eggs and milk.

That said, for every 12-gram serving size of Honey Roasted BBQ sauce, you get the following nutritional value:

What Are Chick-Fil-A’s Most Popular Sauces?

The most famous sauces at Chick-fil-A are the Chick-fil-A sauce and the Polynesian sauce. Due to the popularity of the sauces, the restaurant decided to sell them in 16-ounce bottles.

In 2020, squeeze-bottled sauces were first made available for customers at grocery and retail stores in Florida and all Target, Walmart, Publix, and Winn-Dixie locations.

Moreover, other sauces such as Chick-fil-A’s Honey Mustard, Barbeque, and Garden Herb Ranch were made available for retail but in 8-ounce bottles.

Does Chick-Fil-A Have A Special Sauce?

Unfortunately, Chick-fil-A does not have any publicly-known special sauces apart from the sauces on the menu.

What Condiments Are In Chick-Fil-A Sauce?

The condiments present in the beloved Chick-fil-A sauce include barbecue sauce and mustard.

According to reviews by Chick-fil-A’s Atlanta area team members, the best sauce pairing for grilled nuggets is the Polynesian sauce, Honey Roasted BBQ, or the Sriracha sauce.

Is Polynesian Sauce The Same As Chick-Fil-A Sauce?

That said, other sauces to appear during the same period include Honey Mustard and Barbeque. Further, it was not until 2006 that the popular Chick-fil-A sauce was created.

Where Can I Buy Chick-Fil-A Sauce?

Currently, customers from across the country can buy 16-ounce bottles of Chick-fil-A’s sauces (Polynesian and Chick-fil-A) at retail stores such as Food Lion and Harries Teeter.

Nevertheless, customers still have to confirm the availability of the sauces with their local store.

In conclusion, there are currently eight different sauces on the Chick-fil-A menu.

The sauces are made using different ingredients to create diverse and unique flavors that are good for pairing with different food items within the restaurant.