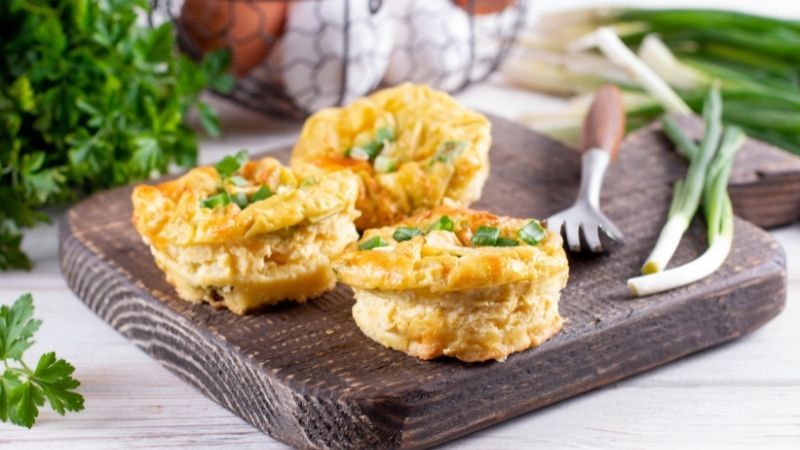 While you might know Starbucks is one of the most popular coffee chains in America, did you know that it’s also known for iconic food items such as Egg Bites?

Have you been wondering: what are Starbucks Egg Bites, and what’s in them that makes them so good? If so, continue reading to find out what I’ve discovered about this delicious breakfast!

What Are Starbucks Egg Bites In 2023?

Starbucks Egg Bites are cage-free eggs that have been cooked using the sous vide method, which is a popular French cooking technique. This gives them a smooth texture with intense pops of flavor. With Monterey Jack and Gruyere cheeses and applewood-smoked bacon on top, these egg bites are a high-protein and delectable breakfast treat in 2023.

Do you want to know more about Starbucks’ Egg Bites, such as how much they cost or what they taste like? Well, keep reading to learn all about why they are such a hit with customers!

What Are Starbucks Egg Bites Made Out Of?

Starbucks has two different versions of Egg Bites available, including a vegetarian option that consists of cage-free egg whites.

However, the most popular option is the traditional applewood-smoked bacon, Monterey Jack cheese, Gruyere, and made with cage-free eggs.

According to a review, the Starbucks Egg Bites are rich and creamy and nothing short of amazingly delicious, and even look cute since they look like mini muffins.

Additionally, you’ll find that they are a little salty thanks to the Gruyere and apple-wood smoked bacon, but the bacon adds a hint of sweetness to balance out the bites.

However, some reviewers have also claimed they aren’t even close to worth the hype and are a reminder of Snackwell’s Devil’s Food Cakes from the 90s, which wasn’t that good.

How Does Starbucks Cook Egg Bites?

Starbucks heats Egg Bites through the sous vide method, which is a French cooking method that requires food to be vacuum-sealed to remove all of the air.

Then, the food item is immersed in a tub of water using special equipment to maintain a precise temperature in the water so that the food cooks consistently.

Therefore, the outcome is that you’ll have creamy, decadent, and velvety eggs that are of a consistency you’ve never experienced before and will want to eat more than just two!

When brought into Starbucks stores, however, Egg Bites are frozen and then defrosted when ready to be put on sale and reheated using a toaster oven.

The Starbucks Egg Bites featuring egg whites with red peppers are healthier than the version with the applewood-smoked bacon due to being lower in calories and fat.

For example, with the egg whites and red peppers, you’re looking at 170 calories, 13 grams of protein, 2 grams of sugar, and 7 grams of total fat.

In contrast, the Starbucks Egg Bites featuring Monterey and Gruyere cheese with applewood-smoked bacon are 310 calories.

It also comes with 19 grams of protein, 2 grams of sugar, and 22 grams of fat, so they’re one of the least healthy options at Starbucks for a breakfast item.

How Much Are Starbucks Egg Bites in Price?

Starbucks Egg Bites, which come in a pack of two, will cost you around $4.45 without tax at most locations, although the price can vary slightly by your location.

Furthermore, for the size of the Egg Bites, it feels like you may get a better breakfast item somewhere else because they may not fill you up.

Starbucks Egg Bites are manufactured by Cuisine Solutions, which is the same company that manufactures food items for Panera Bread.

Is There Flour in Starbucks Egg Bites?

There is no wheat flour in the Starbucks Egg Bites, which makes them a perfect gluten-free option, but they do contain tapioca flour.

However, according to online sources, you should ask that Starbucks make yours with different tongs since customers have said Starbucks uses the same tongs for all bakery items.

Additionally, Starbucks even says that the company cannot guarantee that any of its products are gluten-free, so while it might be true that they are, you should proceed with caution.

Starbucks Egg White Bites are keto, and so are the other flavor options that Starbucks serves since they all contain 11 grams of net carbs or less.

Do the Egg Bites at Starbucks Contain Dairy?

Starbucks Egg Bites do contain dairy since the Egg Bites contain cheese, cottage cheese, milk, and other dairy sources, which are listed within the full ingredients list on the company website.

How Many Weight Watchers Points Are Starbucks Egg Bites?

Starbucks Egg Bites are going to cost you between 5 to 9 Weight Watchers Points, depending on which version you get, with the egg whites and red pepper being the least in points.

Starbucks Egg Bites are a breakfast item at Starbucks that consists of the eggs being cooked using the sous vide method so that you get creamy and decadent eggs cooked perfectly.

Furthermore, the most popular variety contains Monterey and Gruyere cheese topped with smoked applewood bacon, and all of the Egg Bites use cage-free eggs.