DHL is a logistics company owned primarily by Deutsche Post and headquartered in Bonn, Germany. However, even though the company is decidedly European these days, it has its roots in San Francisco, California.

Indeed, the company was founded in 1969 by three American men: Adrian Dalsey, Larry Hillblom, and Robert Lynn. As you might have guessed, the founders lent not only their business savvy but also their names to the company. To find out more about DHL, keep reading!

DHL comes from the first initial of the last name of DHL’s three founders: Adrian Dalsey, Larry Hillblom, and Robert Lynn. DHL has a number of slogans, including “Excellence. Simply Delivered” and “We move the world.” DHL’s logo is made up of the acronym intersected by three stripes. These stripes are meant to represent forward motion and speed in 2023.

This article has even more interesting facts about the meaning of DHL’s name, slogan, and logo, so be sure to read on for more facts!

What Do the Letters “DHL” Stand For?

This acronym comes from the first letter of the last name of each of the company’s founders: Adrian Dalsey, Larry Hillblom, and Robert Lynn.

Hillblom started a job as a courier for the insurance company Michael’s, Poe & Associates (MPA) while studying law at the University of California, Berkeley.

After graduating, Hillblom met Adrian Dalsey and Robert Lynn. Together, the three planned to expand MPA’s fast delivery to other business enterprises.

What Does “DHL” Mean in the Urban Dictionary?

While DHL unquestionably stands for Dalsey, Hillblom, and Lynn, a number of other humorous acronyms have surfaced over the years.

Many of these acronyms poke fun at the company’s service. Some examples include:

What Does the DHL Slogan Mean?

DHL has a couple of slogans. Let’s dive into what each of them means:

One slogan is “Excellence. Simply Delivered.” According to the company, this slogan is more than just a tagline – it’s a way of living and doing business.

More specifically, DHL wants to be the best in the world when it comes to connecting people and improving their lives.

In order to achieve this goal, the company has invested heavily in employee training programs that teach about the company’s core values and purpose.

Another slogan is “We move the world.”

This plays on the company’s main service (transporting packages), while also hinting at its larger purpose of keeping the economy and international trade functioning.

A third DHL slogan is “Yellow. The new Brown.” This slogan indicates DHL’s desire to overtake UPS as a major player in the logistics industry in the United States.

What Does the DHL Logo Mean? 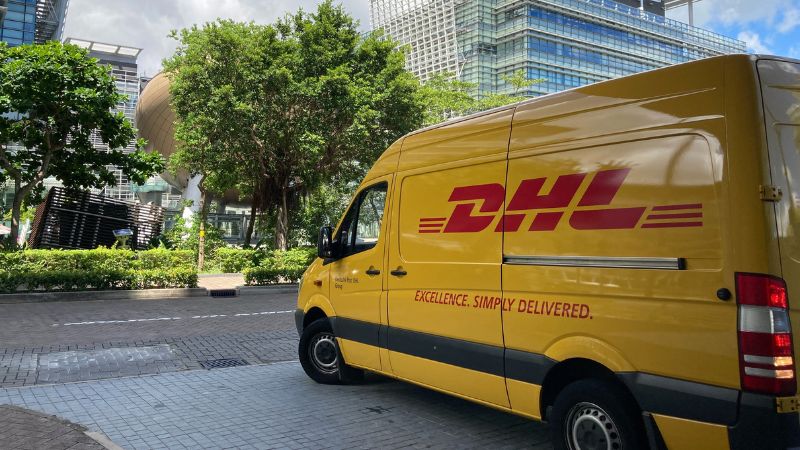 There have been 3 versions of the DHL logo, since the company was founded in 1969.

Some elements, like the bold, italicized font have remained fairly consistent over the years, while others have changed.

In the original design used from 1969 to 1983, the company name was white and the background was bright red, and each letter was separated by a white line.

DHL’s intra-US expansion in 1983 coincided with the introduction of a new logo. This new version introduced three stripes into the logo, meant to create a sense of motion.

In addition to the stripes, the lettering “Worldwide Express” became part of the logo. Its purpose was to explain the company’s business to those unfamiliar with the DHL abbreviation.

DHL’s current logo was introduced in 2002 when the company was purchased by Deutsche Post. This version kept the three stripes and the italicized font, but added a yellow background.

What Do the 4 Pillars of DHL Mean?

Let’s take a closer look at what each pillar of the company is responsible for:

Express – As its name suggests, this division is a leading provider of international express services. Its core business is international time-definite shipments to more than 220 countries.

Post– eCommerce – Parcel – This division delivers about 64 million letters a day in Germany. It also has a portfolio of dialogue marketing products to help advertisers reach target groups.

What Do the Values of DHL Mean?

DHL’s vision is to be a post office for Germany and a logistics company for the world. In order to fulfill this mission, DHL has a mission statement consisting of four elements:

To know more, you can also read our posts on DHL eCommerce, why is DHL so bad, and how late does DHL deliver.

From its humble beginnings as a San Francisco-based courier company, DHL has become a global leader in the parcel delivery and logistics industry.

Its name pays homage to the founders Dalsey, Hillblom, and Lynn, while its slogan, logo, mission statement, and values all point to the company’s goals for the future.