Apple is one of the biggest names in the tech industry, but did you know there is an Apple Park? If not, you’re likely wondering what Apple Park is.

Well, I have been looking into this question and have all you need to know about Apple Park, so keep reading to find out what I’ve discovered during my research!

Do you want to know more, like what the purpose of Apple Park is? If so, don’t stop reading because I have even more details to share with you!

What Is the Purpose of Apple Park?

Apple Park is supposed to be the ultimate campus for the over 12,000 Apple employees, and also serves as a nature refuge, unlike a regular business campus with trees, plants, and ponds.

Steve Jobs, the co-founder of Apple, had envisioned Apple Park and wanted this ring-shaped building to be something visitors could be amazed by when they arrived.

As a result, Apple Park sits on more than 175 acres, has a Steve Jobs Theater, and is home to over 12,000 Apple employees. Apple Park is massive and also includes the following:

Can You Visit the Apple Park?

You can’t go inside the private ring-shaped main building of Apple Park, but there is an Apple Park Visitor Center where you can go shopping, explore, and learn about Apple.

As well, you can see the main building from the Visitor Center, which is what Jobs wanted, for people to marvel at this massive building.

To illustrate, in the Apple Park Visitor Center, you can see the designs and principles of Apple Park, which replaced the original headquarters and was opened to employees in 2017.

In addition, Apple products and accessories are sold here.

Further, there is the Apple Cafe that you can visit, which offers both outside seating and inside seating for guests to get refreshments as they marvel at Apple Park.

You can go to the Roof Terrace if you’re interested, and you’ll see the amazing Apple Park view from the top, where you can see the beautiful nature surrounding it, such as the pond and trees.

When Was Apple Park Built?

Construction for Apple Park began in 2014, though it had been slated for a year before but ended up getting delayed. Eventually, it was opened to employees in 2017.

Does Apple Park Have a Gym?

Overall, it’s huge enough for all employees to work out and has more than enough equipment for everyone.

Is Apple Park Bigger Than the Pentagon? 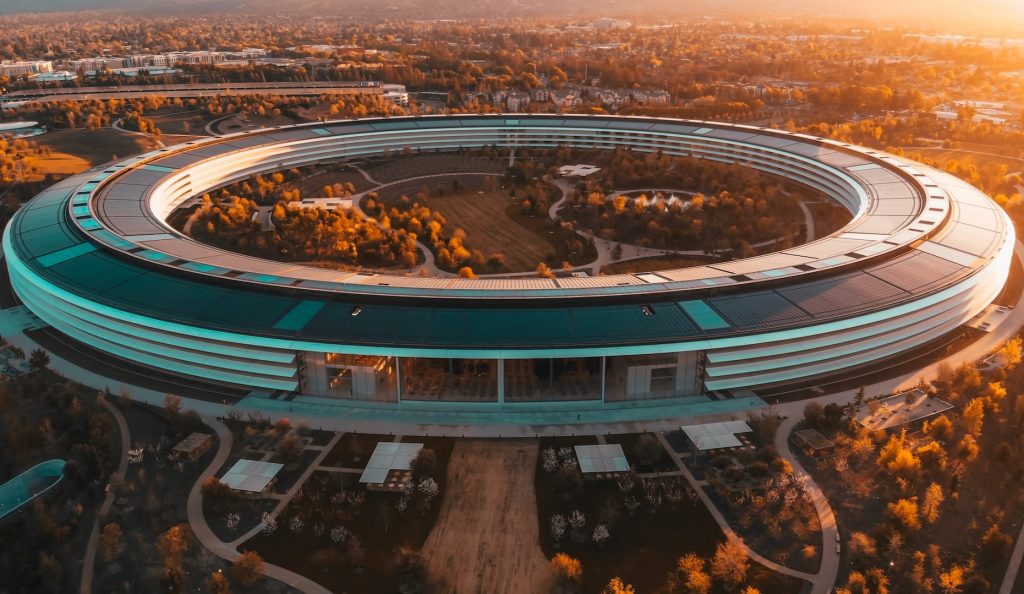 Apple Park isn’t bigger than the Pentagon and is only around one-third the size of the Pentagon when you compare square footage.

Where Is Apple Park Located?

What Time Does Apple Park Close?

The Apple Park Visitor Center is open from 10 AM to 6 PM so that the public can come in, enjoy the scenery, and learn history anytime during these hours.

Is Apple Park a College?

Apple Park isn’t a college but is Apple’s new headquarters that was first opened to employees in 2017. Currently, it houses more than 12,000 Apple employees.

Furthermore, the main building is circular and is 2.8 million square feet, where you’ll find trees, plants, and an artificial pond surrounding it, making it look like a nature reserve.

What Can You Do at Apple Park?

If you don’t work for Apple, you can still enjoy Apple Park at the Visitor Center, which features an exhibition, an Apple Store, an observation deck, and a café.

How Far Is Apple Headquarters From San Francisco?

Apple Headquarters, which is located in Cupertino, California, and is known as Apple Park, is around 37 miles from San Francisco, California.

To know more, you can also read our posts on whether Apple Pay is international, whether the Apple Store can unlock your iPhone, and whether Apple News is biased.

Apple Park is the headquarters for Apple Inc., and is located at 1 Apple Park Way in Cupertino, California, which is around 37 miles from San Francisco.

Additionally, Apple Park is a massive 2.8 million square foot building that is powered using 100% renewable energy that sits on 175 acres filled with drought-resistant trees, plants, and an artificial pond. Also, there is a Visitor Center featuring an exhibition center, café, and store.