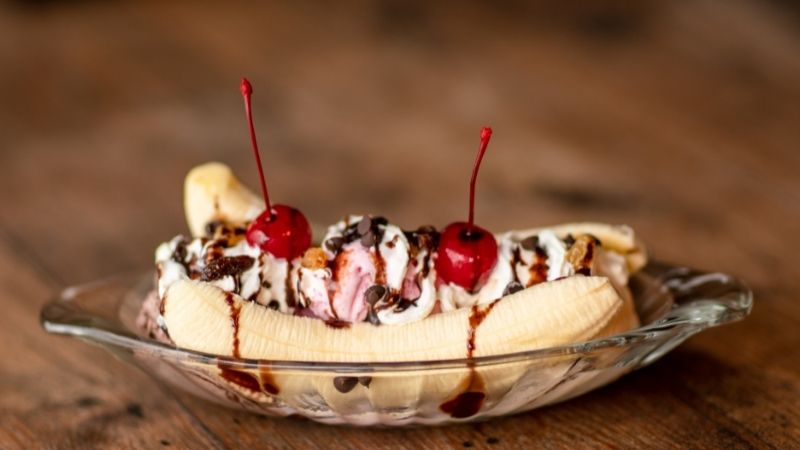 The banana split is a classic ice cream treat enjoyed by many at diners and soda shops over the decades. Today, some fast-food chains, such as Dairy Queen, offer their own versions of the banana split.

This article answers some commonly asked questions about banana splits at Dairy Queen and should give you helpful information, so keep reading to learn more!

A Banana Split at Dairy Queen is one of the items on the Classic Treats menu in 2022. It is available at participating locations since each franchise location is individually owned and operated. Made with a banana sliced in half, a generous helping of DQ soft serve, and covered in various flavored toppings, it certainly makes for a fun dessert.

Keep reading to find out more about the DQ Banana Split, including what it’s made with, how much sugar is contained, along with other related facts!

What Are the Ingredients in a Dairy Queen Banana Split?

To make a banana split, the most important ingredient, of course, is ice cream. At Dairy Queen, vanilla soft serve is used with the signature curl on top.

Additional ingredients that give the Banana Split its recognizable flavors and texture are banana slices, strawberry, pineapple, chocolatey toppings, and whipped topping.

How Much Sugar Is in a DQ Banana Split?

For comparison, that’s more than a typical vanilla cone but is still less than the amount of sugar in many of DQ’s Blizzard treats.

Does a DQ Blizzard Come With Nuts?

Traditionally, a Dairy Queen Banana Split does not come with nuts.

However, since many DQ locations use nuts in some items, such as the Peanut Buster Parfait, you can likely add nuts to your banana split at an extra charge.

What Are the Sizes of a Dairy Queen Banana Split?

Dairy Queen’s official menu lists only one size for the Banana Split. It contains one banana and three swirled mounds of soft serve.

It is possible that some locations offer more size options since menus vary between individual franchise owners.

But generally, the Banana Split comes in a single-size plastic bowl.

What Is a Banana Split Blizzard? 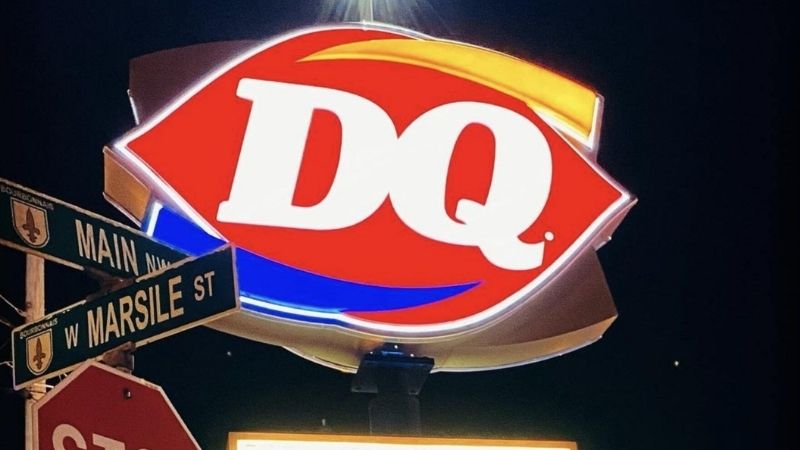 At some locations, Dairy Queen offers a Banana Split Blizzard on the official menu.

It contains all the same toppings as the standard banana split- bananas, pineapple, strawberry, and chocolate.

Instead of being served in a bowl, however, the Banana Split Blizzard is blended together with vanilla soft serve and served upside-down in a DQ cup.

If your local Dairy Queen does not have the Banana Split Blizzard on the menu, it is still possible to order as long as they have the needed toppings in stock.

Simply order a vanilla blizzard and add the extra toppings of pineapple, strawberry, and chocolate, along with bits of banana.

What Sort of Ice Cream Does DQ Use in Its Banana Splits?

Dairy Queen’s soft serve, which is used in all of the Blizzards and classic treats, including banana splits, is made with milk and milkfat, along with sugar and other ingredients.

Due to its lower milk-fat content, the soft serve cannot be called ice cream, according to the FDA.

However, it still has that creamy texture and sweet vanilla flavor that is crucial for any banana split.

How Many Calories Are in a Dairy Queen Banana Split?

Dairy Queen’s Banana Split will typically contain 520 calories. That is more than most vanilla cones but still fewer calories than many Blizzard flavors.

How Much Does a Dairy Queen Banana Split Cost?

In many cases, you can get a DQ Banana Split for $4.39. That is the same price as the fan-favorite Peanut Buster Parfait.\

In the past, some locations have participated in a promotion sale, charging only $1.99 for a Banana Split at Dairy Queen.

Since individual menus and prices between stores often vary, try to keep an eye out for deals like this at nearby DQ restaurants.

Keep in mind, though, that Dairy Queen cannot guarantee that its products will be free from cross-contamination.

Due to the environment in which the treats are prepared, it is possible that some gluten contamination may occur.

If you want to be sure you’re getting no gluten in your Dairy Queen order, you may want to try the newer Non-Dairy Dilly Bar, which is also vegan and gluten-free.

Dairy Queen’s take on the classic Banana Split dessert is widely offered at franchise locations far and wide. It is made with bananas, flavored toppings, vanilla soft serve, and whipped topping.

Banana Splits at Dairy Queen typically come in one size and contain 74 grams of sugar and 520 calories each. The Banana Split is a good gluten-free option and an all-around crowd-pleaser thanks to its variety of flavors and textures.