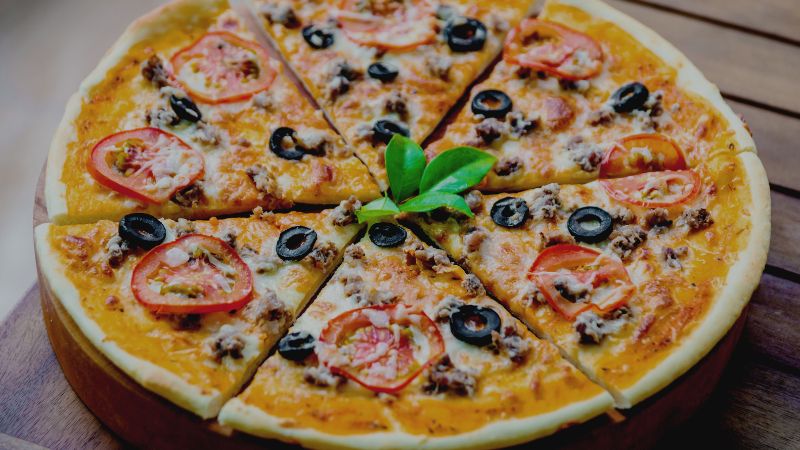 Domino’s pizza is a popular choice for lunch and dinner alike, especially at family gatherings and parties of every kind. However, it’s important to know what size of pizza you should order from Domino’s in order to ensure everyone gets a slice!

Generally, large size pizzas from Domino’s are a good option for feeding multiple people, but how big are they exactly? This article will tell you all you need to know, so keep reading!

Domino’s large pizzas are 14 inches wide in 2022. If you order a hand-tossed large pizza, you will get eight slices that feed around three to five people. A large thin crust pizza is cut into 16 slices feeds two to five people. However, note that you can’t order a large pizza made with gluten-free or handmade pan crusts.

Keep reading for more information about large pizzas at Domino’s, including how many slices are in specific types of pizzas, along with other related facts!

How Many Slices Are in a 14 Inch Pizza From Domino’s?

14-inch pizzas from Domino’s that are made with the hand-tossed crust are cut into eight slices. Keep in mind, though, that if you order a large thin crust pizza, it will be cut into 16 square slices.

How Many Slices Are in a Large Brooklyn Pizza From Domino’s?

Since Brooklyn-style crust at Domino’s is cut into bigger slices, there are fewer slices in a large Brooklyn pizza than there are in a hand-tossed pizza.

For a large size, the Brooklyn-style pizza from Domino’s is cut into six slices.

Does Domino’s Have Extra-Large Pizzas?

Domino’s does have extra large pizzas, but they’re only available when you order the Brooklyn-style crust.

Brooklyn-style pizzas are cut into bigger slices, so they only come in large and extra-large sizes.

An extra-large Brooklyn pizza from Domino’s is cut into six slices, same as the large. However, if you want 12 slices, you can request that Domino’s cut it accordingly.

Is It Better to Get One Large Pizza or Two Medium Pizzas?

By ordering two medium pizzas at Dominos, you would have more overall surface area of pizza compared to one large pizza.

Depending on the size of the group you’re feeding, consider the amount of pizza you need as well as the price of each pizza.

Overall, keeping these factors in mind will help you choose the best Domino’s order for your family or friends.

What Are the Sizes of Domino’s Pizzas?

Sizes available for Domino’s pizzas will depend on which type of crust you’re ordering.

Hand-tossed crust and thin crust pizzas come in small, medium, and large size options. Gluten free pizzas only come as small. The handmade pan crust is only available as a medium pizza.

How Many People Will a Large Domino’s Pizza Feed?

A large Domino’s pizza made with the hand-tossed crust will typically feed between three to five people.

Further, a large thin-crust pizza will feed around two to five people, and so will a large Brooklyn pizza.

If you know the group you’re ordering for, and know how much pizza they normally eat, this should help you decide how many pizzas to get, and what sizes you need.

If you order a 14-inch hand-tossed pizza from Domino’s, it will be cut into eight slices and feed three to five people. Brooklyn-style large pizzas are cut into 6 big slices.

Gluten-free and handmade pan pizzas only come in small and medium sizes respectively. Thin crust pizzas can be ordered large, but they’re cut into 16 square slices, so it’s different than your standard pizza.