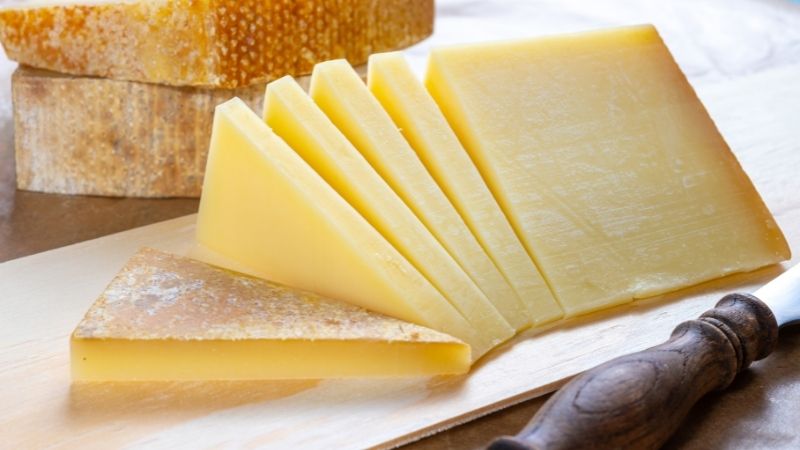 Domino’s pizza would be nothing without its delicious cheese. We know mozzarella is the standard cheese used in many pizzas, but what sort of cheese does Domino’s use?

Well, the answer is actually more extensive than you might think. This article will tell you all about Domino’s cheese and answer questions you may have, so keep reading!

Domino’s has eight different types of cheese on the standard menu in 2022. The types of cheese are mozzarella, provolone, feta, parmesan, asiago, a pizza blend, cheddar, and American cheese. The exact combination of cheese will depend on the type of pizza, but you can choose your own cheese and toppings using the pizza builder online.

Keep reading to find out all you need to know about the cheeses used at Domino’s, including what dishes they’re used on and more useful facts!

What Are the Six Kinds of Cheese on Domino’s Pizza?

Domino’s has a specialty pizza called the Wisconsin Six Cheese Pizza. It is topped with mozzarella, feta, provolone, cheddar, Parmesan, and Asiago.

In general, Domino’s actually has eight different kinds of cheese to choose from. These are mozzarella, feta, provolone, cheddar, American cheese, asiago, and a pizza blend.

Does Domino’s Make Its Own Cheese?

Domino’s does not make cheese from scratch, but it does have a special ratio of mozzarella and provolone that is used as a base for pizzas.

This ratio is likely about 70:30 (mozzarella and provolone).

Does Domino’s Use Real Mozzarella Cheese?

Domino’s mozzarella cheese is in fact real. The ingredients in the cheese include pasteurized milk, salt, enzymes, cultures, and modified food starch.

All of Domino’s cheese is made with real, natural ingredients for a genuine, delicious addition to your Domino’s pizza or sandwich.

Does Domino’s Use Provolone Cheese?

Provolone cheese is one of the cheeses used at Domino’s. It is often used on Domino’s sandwiches as well as on pizzas in shredded form.

You can order shredded provolone on your pizza using the “Build Your Own Pizza” feature on the Domino’s website and app.

What Kind of Cheese is in Domino’s Cheese Bread?

Domino’s Stuffed Cheesy Bread is made with two kinds of cheese. These are Pizza Cheese (mozzarella) and shredded cheddar cheese.

Where Does Domino’s Get Its Cheese?

Leprino Foods supplies Domino’s with its cheese. It is run out of Denver, Colorado, and is the world’s largest supplier of mozzarella cheese.

In fact, Leprino actually supplies 85% of the pizza market with cheese.

For example, the company also supplies cheese and other dairy products to Pizza Hut, Little Caesars, Papa John’s, Digiorno, and many more.

What Is Domino’s Feta Cheese?

Domino’s feta cheese can be ordered on any pizza. It comes in little chunks of flavorful cow milk cheese. It contains cultured milk, enzymes, salt, and potato starch.

Does Domino’s Cheese Have Rennet?

There is no animal rennet in any of Domino’s cheeses. It is an ingredient that is too expensive to use for Domino’s pizza and other menu items.

Does Domino’s Have Goat Cheese?

Goat cheese isn’t on the standard menu at Domino’s. Most Domino’s stores only use feta, mozzarella, provolone, parmesan, asiago, cheddar, American, and a pizza blend.

You may, however, come across a Domino’s location that uses goat cheese, since most stores are individually owned franchises and may have unique menu items.

All of Domino’s cheese is vegetarian, making Domino’s pizza a great option for those who eat a vegetarian diet.

Domino’s has a lot of specialty pizzas that are vegetarian, such as the Spinach and Feta pizza, which you may want to try.

Domino’s mozzarella cheese is made with pasteurized milk, which means it’s safe to eat for everybody.

Does Domino’s Have Vegan Cheese?

In some places, Domino’s offers vegan cheese and vegan pizza crust. Domino’s Australia has vegan mozzarella on the official menu.

However, in most places in the world, you will have trouble finding a Domino’s store that has vegan cheese.

To check whether your local Domino’s has vegan cheese, you can call the restaurant to ask an employee, since menus vary.

To learn more, you can also read our posts on how late does Domino’s deliver, is Domino’s crust vegan, and is Domino’s garlic bread vegan.

Domino’s has several different kinds of cheese that are used on pizza, sandwiches, and more. These include mozzarella, provolone, feta, parmesan, asiago, cheddar, and American cheese.

You can order whatever combination of cheese you would like on your pizza using the “Build Your Own Pizza” feature on Domino’s website and app.