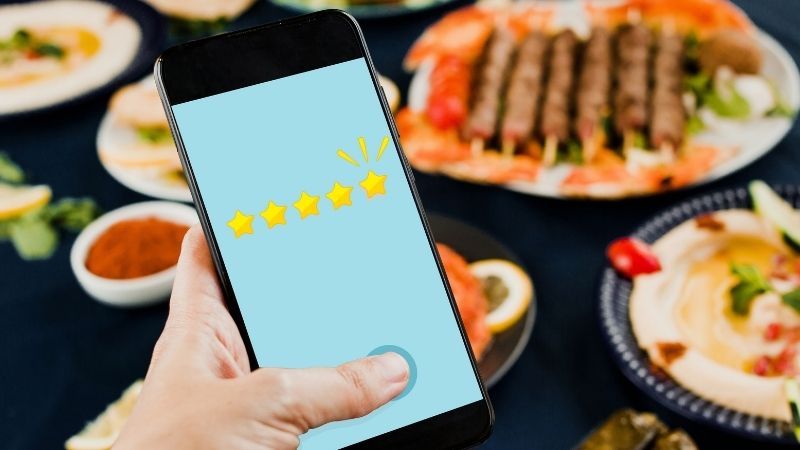 Uber Eats lets you order food from a restaurant in your area and have someone deliver it to your address.

Many services of this kind give you the option to provide some sort of feedback on this person. Here’s how to rate a delivery driver on Uber Eats!

How To Rate Uber Eats Driver In [currentyear]

To find out everything you need to know about the rating system on Uber Eats, including whether it matters, how to improve yours as a driver, and more, read on!

Why Are There No Stars On Uber Eats?

Uber Eats doesn’t have stars because it instead uses a thumbs up and thumbs down system for rating drivers.

That said, this is likely because, compared to rides at least, food delivery couriers don’t pose as much of a risk to customers, so an elaborate rating system wasn’t necessary.

In the main Uber app, seeing a driver with a low star rating is a red flag, and you can decide to avoid them and look for someone else with better reviews.

However, on Uber Eats, you don’t choose who picks your food up from the restaurant, so having a similar feedback framework wouldn’t make sense.

Further, Uber Eats uses the 100 most recent ratings in thumbs up and thumbs down to create an overall score closer to the traditional one implemented in rides.

For example, if a driver has received 80 thumbs up and 20 thumbs down, they’ll have a rating of 80%.

What Happens If You Forget To Rate An Uber Eats Driver?

Can You Change An Uber Eats Driver Rating?

Yes, you can change the rating you gave a driver on Uber Eats using the receipt you receive after delivery is completed.

Moreover, since the need to change the rating comes after the delivery is completed and an initial rating was given, you’d need to access a past receipt.

That said, you can find the receipt within the app by following these steps:

Also, Uber Eats sends receipts via email, and you should look in your inbox to find the one you want.

Sometimes, Uber Eats emails go to the Spam folder or Promotions tab, and that’s where you should look if you can’t find them in your inbox.

Yes, Uber Eats drivers can see ratings, but they don’t see who rated them.

Instead, all they have access to is their total satisfaction rating calculated from the number of thumbs up and down on their 100 most recent reviews.

However, Uber Eats drivers can use this information to determine who gave them what rating fairly accurately.

For example, a driver that has a bad experience with a customer before noticing that their score has gone down can safely assume that the customer gave them a thumbs down.

Yes, Uber Eats driver ratings matter because they determine whether or not you get offers for deliveries.

Yes, Uber Eats deactivates drivers for low ratings. Further, I know that this is enforced because I found out via the guidelines on the Uber Eats website and some driver reports.

Moreover, what counts as a low enough rating for deactivation from Uber Eats differs between places, but the threshold generally falls between 80% and 90%.

For example, Uber Eats drivers in California need to maintain a minimum of 86% as their satisfaction rating; otherwise, they get deactivated.

However, Uber Eats does not deactivate drivers for low ratings until they’ve been issued multiple notifications that act as warnings.

How Do I Improve My Ratings On Uber Eats?

If you get notifications that your Uber Eats rating is low, you could try the following to improve it before you get deactivated:

To learn more, you can also read our posts on Uber Eats refund policy, Uber Eats late delivery, and how much to tip Uber Eats.

To rate an Uber Eats driver, you have to wait until after delivery for the prompt to give them a thumbs up or down.

If you forget to rate the driver, nothing will happen, but you can rate them later or change your rating using the order’s receipt.

Also, your receipts are available within the app and in the email, you use for the service.

Further, Uber Eats deactivates drivers for low ratings if they fall below a determined threshold that changes depending on where they’re based.

However, before getting deactivated for a low rating on Uber Eats, you will get notifications and time to turn it around.