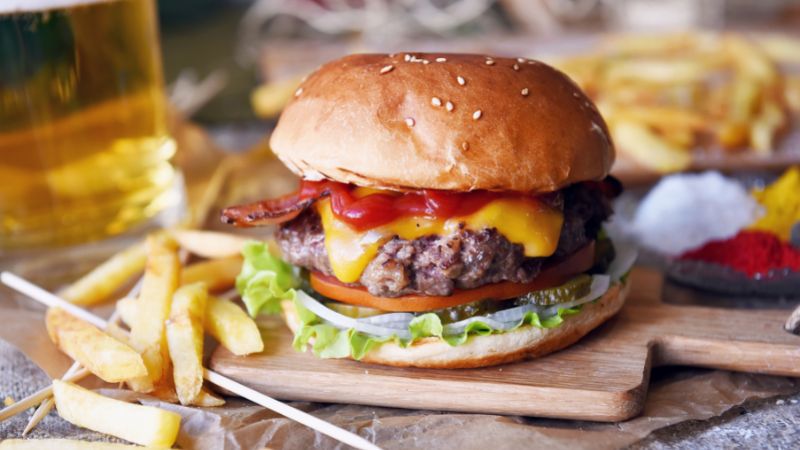 Special menus have become all the rage recently. While many restaurants do not have secret menus, they can still technically make anything they have the ingredients for. This concept has enthralled some customers and created a fan-made “secret menu” at some stores.

McDonald’s does not officially have a secret menu, but that hasn’t stopped many from showing “secret items” on social media. Many of these, like the McNasty, are DIY options that customers created.

Table Of Contents show
1 What Is The McDonald’s McNasty?
2 The McDonald’s McNasty is not technically on the menu in 2023. You cannot order this burger directly from a McDonald’s, but you can order all the items you need. Basically, this burger is a McChicken and a McDouble put together. You simply order both, remove some of the buns, and stack the burger together.
2.1 How To Order a McNasty
2.2 Does McDonald’s Have A Secret Menu?
2.3 What Is A Poor Man’s Big Mac?
2.4 How Many Calories Does A McNasty Have?
2.5 Conclusion

What Is The McDonald’s McNasty?

The McDonald’s McNasty is not technically on the menu in 2023. You cannot order this burger directly from a McDonald’s, but you can order all the items you need. Basically, this burger is a McChicken and a McDouble put together. You simply order both, remove some of the buns, and stack the burger together.

Keep reading for information on McDonald’s secret menu and how to make the McNasty!

How To Order a McNasty

After that, stack the sandwiches together, and you have a McNasty!

It isn’t a “real” sandwich from McDonald’s, so you probably aren’t going to get far if you try to order this sandwich at the window.

However, it is pretty easy to throw this burger together after ordering both component sandwiches separately.

Does McDonald’s Have A Secret Menu?

Yes, McDonald’s has a “secret menu.” However, this is not as widespread or understood as you may believe.

That said, the fast-food restaurant does not train its staff to make this “secret menu.” Instead, this menu is created through social media and experimentation.

While some high-end restaurants have a secret menu to intrigue customers, this likely isn’t the case at your local McDonald’s.

Also, whether or not you can actually get these secret items at your local store varies.

If anything, you could explain to the staff how to make it, but they may not make anything off-menu – especially if it looks like it will take a long time.

Further, some commonly ordered secret items include the McBrunch Burger, McGriddle (which is on the menu in some stores), All American Burger, and the Big McChicken.

Additionally, many of these items must be assembled yourself after ordering certain items, or you’ll have to describe the order to the store staff.

Finally, when attempting to order from the secret menu, remember that it can have negative consequences for the staff and store.

What Is A Poor Man’s Big Mac?

If you’re looking to save some cash, you can order a Poor Man’s Big Mac instead of the usual Big Mac.

To do this, simply order a McDouble with special sauce, extra lettuce, and no tomato. That said, the resulting burger will be just like a Big Mac, except for the extra bun.

However, most people do not miss the extra bun in the least.

Plus, this burger will come to about $1.49, while the Bug Mac usually costs around $3.99. Therefore, you’re saving a lot of money and only missing a bun.

How Many Calories Does A McNasty Have?

A McNasty is a DIY burger from McDonald’s. Therefore, it is difficult to say just how many calories it will have in it.

Essentially, it all depends on how you make it. Technically, you could add up the calories of the two burgers used to make it.

However, this will not be super accurate since you are removing half of a bun from each burger.

The McNasty is a DIY burger you make after ordering a McDouble and a McChicken.

For example, you simply take the bottom bun off one sandwich, the top bun off the other, and then stack them together.

However, you cannot order this burger directly from most stores, as it is not on the menu.

While it is sometimes claimed to be on the “secret menu,” this menu is not official, and the staff is not trained on how to make the items on it.

Therefore, most McDonald’s staff members will not know what a McNasty is nor how to make it.