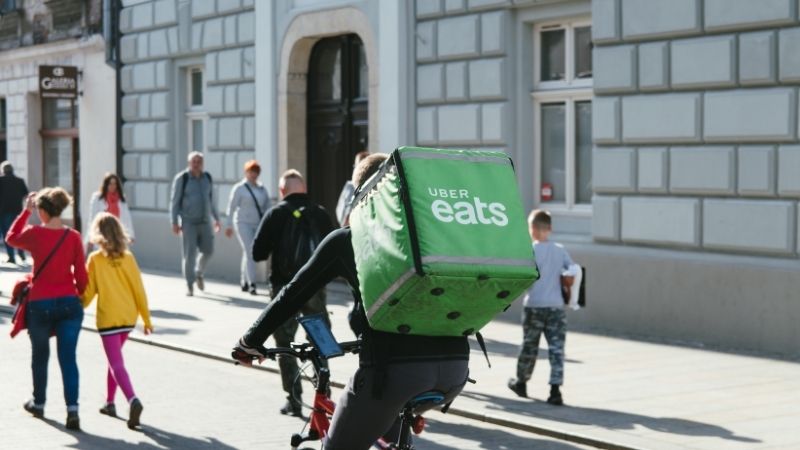 Uber Eats has managed to carve out a path for itself toward becoming one of the biggest food delivery services in the world.

A big part of this is through strong branding. For anyone interested in learning more about this aspect of the company, we looked into Uber Eats’ slogan, so keep reading to learn more about it!

Table Of Contents show
1 What Is the Uber Eats Slogan In 2023?
1.1 Which Slogans Has Uber Eats Used?
1.2 What Are the Values of Uber Eats?
1.3 What Was Uber Eats Originally Called?
1.4 What Does the Uber Eats Logo Mean?
1.5 What Is up With the New Uber Eats Commercial?
1.6 Conclusion

Uber Eats does not have a permanent slogan in 2023. Instead, the company chooses a different slogan and uses it for some time whenever there’s a campaign running. These campaigns are intended to announce new features or target different audiences and the slogans change to reflect this. Uber Eats’ current most popular slogan is “Now delivering eats… and don’t eats.”

Continue reading to find out everything you need to know about Uber Eats’ slogan, as well as other aspects of its branding, like the logo, hit commercials, and more!

Which Slogans Has Uber Eats Used?

Some of the slogans that Uber Eats has used so far include the following:

As we’ve established above, Uber Eats uses different slogans depending on the company’s goals at the time.

For example, the last one on the list was used when the company was still new.

At the time, food delivery apps weren’t as popular as they are now, so the slogan was intended to make it obvious what service was being offered.

What Are the Values of Uber Eats?

Uber Eats has the same values as its parent company, Uber, and these are:

What Was Uber Eats Originally Called?

Uber Eats was originally called UberFresh when it launched. At the time, the service was only available in Los Angeles and delivered a small selection of fresh food, namely:

What Does the Uber Eats Logo Mean?

Uber Eats’ current logo is just the company name with the words written in black and green respectively.

Black is used for the name “Uber” because it’s the color of the parent company, while “Eats” is in green in order to evoke ideas of freshness.

When Uber Eats was first established, its logo included a fork that was meant to make it clearer that it was a food delivery service.

As the company became more popular, the fork was eventually dropped.

While the logo has gone through some redesigns over the years, the company mostly only changed the font types and colors.

What Is up With the New Uber Eats Commercial?

In February 2022, Uber Eats ran a commercial during the Super Bowl that went viral and made a federal agency step in to issue a warning to the public.

This ad was part of the “Now delivering eats… and don’t eats” campaign that was meant to show the public that the service can now be used for more than just food.

However, the part that caught most people’s attention featured Nicholas Braun, who is known more as Greg from Succession.

In the commercial, the actors were trying to eat inedible items like diapers and candles. Braun’s character was drinking some liquid dish soap and this is what caused the controversy.

After the commercial aired, the US Consumer Product Safety Commission issued a statement in the form of a tweet, reminding the public of the dangers of consuming soap.

Aside from the usual dangers and statistics that have always existed, this message was also intended as a response to the recent uptick in people drinking soap, as they believe it’s medicine.

Uber Eats does not have a permanent slogan, instead choosing to focus on different ones depending on the campaign. These campaigns have different goals, including announcing new features and targeting certain audiences.

Uber Eats caused issues with an ad that aired during the 2022 Super Bowl with a slogan advertising how the service delivers more than food. In this spot, one of the actors featured was shown drinking soap and a government agency had to issue a warning against doing that in real life.