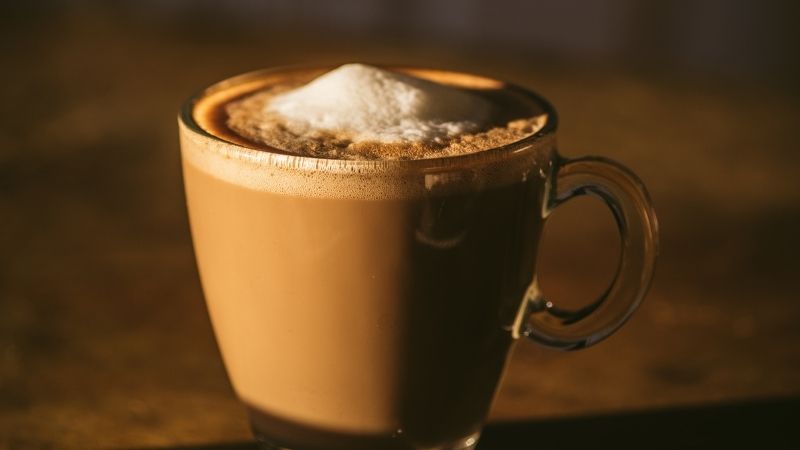 If you’re an espresso fan, you may be thinking of trying a Flat White on your next visit to Starbucks.

But before you order one, you probably want to know- what is in a Starbucks Flat White? We looked it up and have all the answers for you!

What Is a Starbucks Flat White?

Starbucks’ Flat White is made with two shots of ristretto, which are smaller and more concentrated espresso shots in 2022. This is 1/3rd of the drink and the remaining 2/3rds is steamed milk which has been frothed. The combination of ristretto shots and steamed milk gives the Fat White an intense, slightly sweet taste.

To find out more about Flat Whites, how they are different from lattes and cappuccinos, and how to make your own, carry on reading. We have all the information you need!

What Is a Flat White at Starbucks?

The Flat White, which consists of two ristretto shots with a layer of steamed milk on top, originated in Australia.

It was introduced by Starbucks in 2015, as a way of delivering a sophisticated and slightly sweeter taste of espresso.

Ristretto means “restricted” in Italian and is a smaller and more concentrated shot of espresso. It has a richer flavor and body.

The Starbucks menu has two kinds of Flat White:

What Are the Ingredients in a Starbucks Flat White?

The ingredients in a Starbucks Flat White are just steamed whole milk and brewed espresso.

What Are the Nutrition Values of Starbucks’ Flat White?

With 170 calories and 13 g of sugars in a 12 oz. serving, the flat white is one of the healthiest coffees on the menu at Starbucks.

The complete nutrition information for a 12 oz. serving of flat white at Starbucks is:

The Flat White at Starbucks has a rich espresso flavor mixed with the taste of steamed milk.

What Is the Difference Between a Latte and a Flat White?

Flat White is one of the coffees made with espresso shots and steamed or frothed milk, along with lattes and cappuccinos.

The differences between the three types of coffee are in the amount and type of milk added on top of the espresso shots.

A latte is almost exactly like a Flat White, as both consist of espresso and steamed milk. The difference is that the latte has an additional thin layer of foam on top.

Moreover, a Flat White starts with two shots of ristretto, which is the smaller and more flavorful version of espresso. So it has a more intense taste.

Further, while Flat Whites originated in Australia, it’s not clear where lattes were invented. However, lattes were popularized in the US by Starbucks.

How Is a Flat White Different From a Cappuccino?

The difference between a Flat White and a cappuccino is in the proportions of espresso to milk.

A Flat White contains two shots of ristretto, which is a slightly smaller and more concentrated version of espresso.

This makes up 1/3rd of the drink and the Flat White is finished up with 2/3rds of milk.

A Starbucks Flat White has a slightly sweet taste even though no sugar or sweetness is added.

That’s because the process of steaming caramelizes the sugars in the milk and releases the taste and flavor.

The Honey Almondmilk Flat White has added sweetness from the honey as well as the sugar that is already added in the almond milk.

As with all Starbucks drinks, you can customize your drink by adding sugar or other sweeteners.

What Is a Macchiato Vs Flat White?

Both drinks are made with espresso and steamed milk but a macchiato has just a few teaspoons of milk.

The Flat White on the other hand is made up of 2/3rds milk and 1/3rd ristretto shots. This means the macchiato is a smaller and more intense drink since it is mostly espresso.

Do You Use Whole Milk in a Flat White?

Typically, whole milk is used for a Flat White since it has a creamier taste.

However, whole milk can be substituted with non-dairy milk as well as nonfat milk, 2% milk, breve (half-and-half), or heavy cream.

How to Make a Starbucks Flat White

You will need an espresso coffee maker and a small jug to steam and froth the milk. You can use the last few drops of milk remaining in the jug to try your hand at latte art.

To know more, you can also read our posts on Starbucks Medicine Ball, Starbucks Pink Drink, and Starbucks sweet cream.

Starbucks’ Flat White is made with espresso and steamed milk. It uses two shots of ristretto for an intense flavor while the steamed milk adds a creamy and caramelized taste.

The Flat White is low in calories and sugar compared to other coffees, making it one of the healthiest drinks at Starbucks.