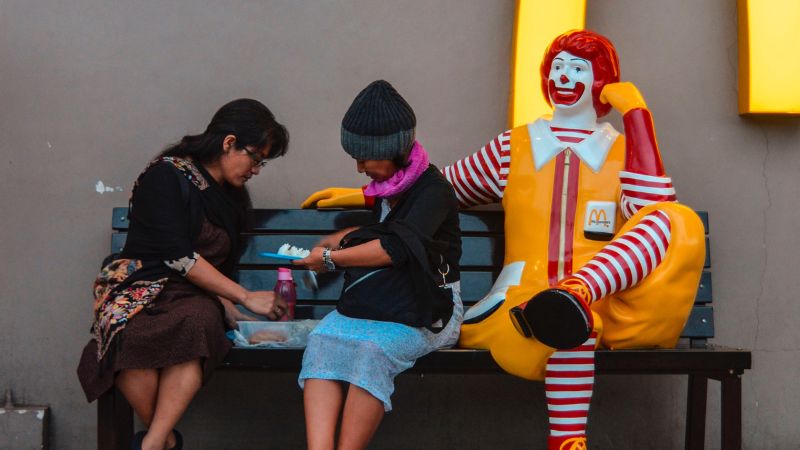 If you live in the United States, you likely know who Ronald McDonald is – even if you don’t eat at McDonald’s all that much. However, very few people know the history behind this character.

Ronald McDonald is now a cultural icon. He has appeared outside of McDonald’s advertisements and is recognizable. To learn who this person really is, keep reading!

Who Was Ronald McDonald?

Ronald McDonald is not an actual person. Instead, he is a character that was created to advertise to children. Burgers and clowns just seemed to work well for the company. Willard Scott originally played Ronald McDonald and claimed that he created the character. However, he was dropped by the company after only two years.

Keep reading for information on Willard Scott and the other actors who have played Ronald McDonald!

Was Ronald McDonald A Real Person?

No, Ronald McDonald was never actually a real person. Instead, this character was simply a brand mascot- something McDonald’s doesn’t like to talk about.

This company doesn’t utilize its original clown mascot as much anymore. However, he is still a recognizable person.

In fact, Taco Bell poked fun at the mascot just a few years ago, testifying to his staying pattern. As a character, this mascot has been played by many different people.

For example, the first person to appear as Ronald McDonald was Willard Scott, who played him in an ad in Washington, DC.

However, he was dropped soon after the first ad, as McDonald’s thought he was “too big” to play the active Ronald McDonald.

While this mascot was originally a clown and has stayed a clown, McDonald’s did consider changing it a few times.

For instance, he almost changed to a cowboy and then a spaceman, but these changes never stuck.

There are several reasons McDonald’s no longer uses its mascot. However, Ronald McDonald is not technically retired, so the company may still use the character in the future.

However, the company has been given much criticism over the years regarding its use of this clown.

Originally, the main complaint was that using the clown to target children was unethical, given that McDonald’s sells fast-food.

In fact, McDonald’s has been asked many times to retire the clown and stop advertising to children. Most famously, a group of doctors asked for the clown to be retired in 2011.

While the clown is a bit outdated, the more troublesome fact is that he targets children. Furthermore, during the 2016 clown sightings, McDonald’s toned down the mascot.

That said, he hasn’t been back in full force since, though the reasons for this are unclear. For the most part, he appears at live events and promotional gatherings.

As previously mentioned, he only played Ronald McDonald a handful of times before the company found a new actor.

Today, he is best known for being the weatherman on the Today show. He was 87 when he died, far above the life expectancy.

Why Is Ronald McDonald The Mascot?

I don’t know why Ronald McDonald is still a mascot or why he was ever chosen to be a mascot. Still, the mascot was first presented to a small market in Washington, DC.

Further, he was played by Willard Scott, who played him on three different TV spots. However, the actor was dropped when the company took the mascot national.

Willard Scott claimed that he created the mascot to advertise to children.

Therefore, the company is still getting a lot of scrutiny today, as many health officials agree that fast-food should not be advertised to children.

When Is Ronald McDonald Getting Retired?

There have been many retirement attempts of the Ronald McDonald mascot. However, none of them have succeeded.

Now, the character is a national icon and instantly recognizable, so it isn’t just about the company using the clown.

For instance, Taco Bell created an ad that used a clown-like character, likely to poke at McDonald’s.

Still, no CEOs have ever announced that they were retiring the clown. In fact, many of them have explicitly stated that they do not plan on retiring him.

Today, he is one of the best-known mascots around.

Where Is Ronald McDonald Now?

Remember, Ronald McDonald is not a real person. Instead, this character was invented as the main mascot of McDonald’s.

The character is not based on a real person or supposed to represent a real person. When McDonald’s was founded, there was no actual person named “McDonald’s.”

Also, the actors that played this character vary widely. Some of them are no longer living, while others still are. For some reason, the company has changed the actor many times.

With that, here’s a list of actors and when they portrayed this character:

To learn more, you can also read our posts on McDonald’s hiring process, McDonald’s statistics & facts, and McDonald’s complaints Australia.

Ronald McDonald was never a real person. However, the character has been played by eight different actors over the years.

Originally, he was played by Willard Scott in a few smaller advertisements.

However, before the company took the character national, it chose a new actor named Michael Polakovs, who played the clown for a few more years.