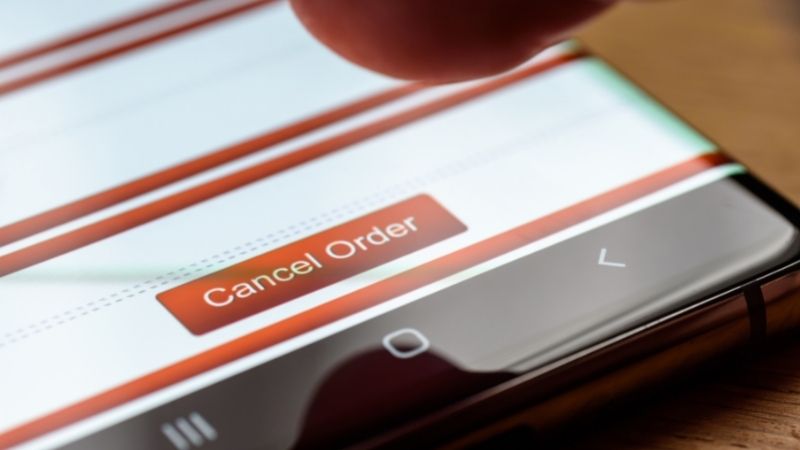 Ordering food online from Uber Eats is a relatively straightforward process, making it easy to place a request for something impulsively.

When you do this then change your mind after, you might want to roll back the purchase. Here’s how to cancel an order through Uber Eats!

How to Cancel an Uber Eats Order In 2022

To cancel an Uber Eats order you would need to start by opening up the app and then going to “Order Food.” Tap the profile icon on the upper left and then “Orders.” This will bring up your order history with the most recent at the top in 2022. Click on it then select “Cancel order” and confirm the action.

Read on to learn everything you need to know about canceling an Uber Eats order, including how drivers can do it, what happens when an order is canceled, and more!

Why Can’t I Cancel My Uber Eats Order?

If you can’t cancel your Uber Eats order, it might be because you took too long to do it so the option is no longer available.

Uber Eats orders are easy to cancel when it’s early in the process and it becomes harder the further along it goes.

For example, you can cancel an order before the restaurant gets and accepts it but it’s going to be harder when a driver has already picked it up and is en route to your location.

To cancel an Uber Eats order when you don’t see the option in the app or website, you should contact customer support.

However, this will require you to explain the reason for wanting to cancel, so customer support can decide if you get a refund or get charged a cancellation fee.

In some cases you might be unable to cancel an Uber Eats order due to a glitch in the app, in which case you could try restarting your device.

Do I Get Charged If I Cancel My Uber Eats Order?

As we’ve established above, you might get charged for canceling your Uber Eats order if you do it at a point where it would be an inconvenience to the people handling it, i.e. the restaurant or driver.

What Happens When I Cancel an Uber Eats Order?

When you cancel an Uber Eats order, what happens next depends on how far along the order had gotten.

If you cancel before the restaurant even takes the order, then you’ll likely get a refund and that will be the end of it.

If you cancel after the restaurant has already started processing the order you might not get a refund and the restaurant decides what to do with the food, e.g. sell it to someone else.

If you cancel when a driver has already picked it up and is on their way to your house, you likely won’t get a refund and the driver decides what to do with the food.

Does a Canceled Uber Eats Order Show up in My History?

A canceled Uber Eats order will still show up in your history and you can’t delete it without deleting your whole account.

For a driver, you can cancel an Uber Eats order at any time after accepting it, and how you do it depends on where in the process you are.

You can cancel an Uber Eats order you had accepted through the app if you haven’t already picked the food up from the restaurant.

When you do this, Uber Eats will find another driver in the area and offer them the delivery right after.

If you’ve already picked up the order and want to cancel, you’ll need to contact Uber support and explain why you can’t make the delivery.

Whether or not Uber Eats pays for a canceled order depends on how far along the order had gotten and who canceled it.

If the order gets canceled by the customer after you’d already picked it up from the restaurant, you’ll still get paid and you can keep the food.

If you’re the one that cancels the order at any point, regardless of the reason, you won’t get paid.

To know more, you can also read our posts on Uber Eats order canceled, Uber Eats delivered to wrong address, and does Uber Eats pay for gas.

If you wait longer than that, you will need to contact customer support, and you might still get charged. Uber Eats drivers can cancel an order after accepting it through the app if they haven’t picked it up yet.